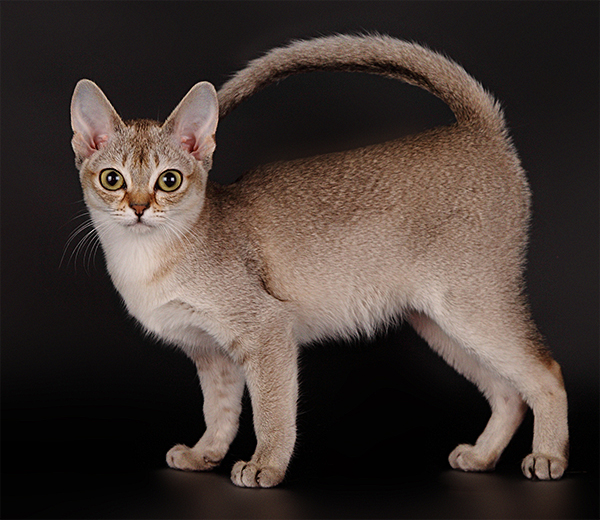 Singapura is a natural breed, you may still see numbers of singapura-like felines in Singapore. Lately they were claimed to be the nation’s heritage and their export is now prohibited. However, it was all different in 70-s, when the couple of Meadow brought three cats from there to California. Tess, Tickle and Puss have immediately started to star at local cat shows and Meadows had to come up with a name for what is going to become a breed - the Singapura. Fanciers, however, have swiftly turned their eyes on peculiar small felines, and the development process has soon begun. As a result of selection, the breed has gained an enchanted colour variety with never before seen pink hues. The natural build of the breed was also enhanced with rounder head shape, a result of crossing with burmese. As such, the american-bred singapura is rather different than the native one. Note that today, the breed in question is rather famed in SEA, before the breed was popular however, locals used to call native felines “drain-cats” or otherwise, that demise has forced them to seek shelter and food among people’s trash and junk. A treatment like this has marked them with fear, reticence and offishness. Since the 1991 however, the situation has changed vice-versa, Singapura is now a live talisman of the country, there is a monument saying so. The breed was first brought to Europe through Belgium in 80-s, and was acclaimed by TICA and CFA in 1984 and 1988 respectively. Despite having an official standard in almost every felinological system, it is still one of the scarcest breeds in the world. It is notable that the Singapura is the smallest feline pet there is, this fact is registered in the Guinness Book of Records. 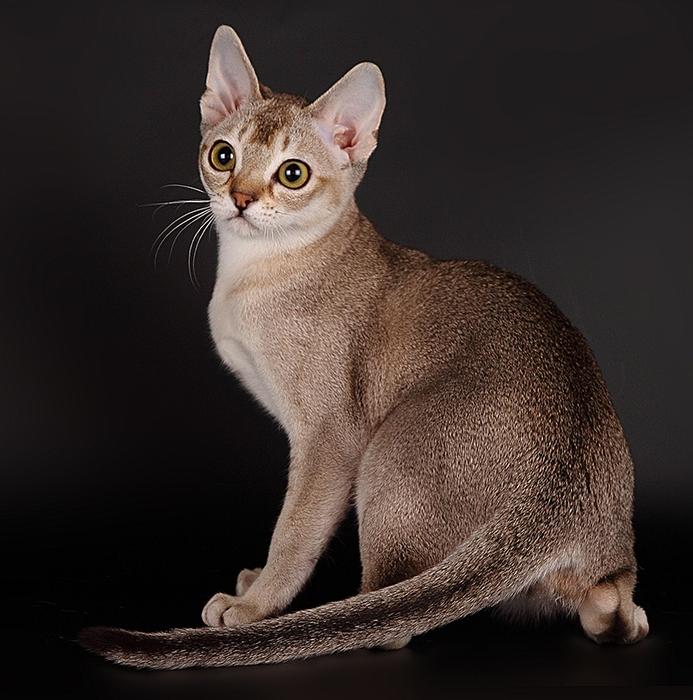 A very small, light and compact feline weighing below 7 lbs. It is rather fit, yet elegant, with a small round head and large expressive eyes and ears. Apart from it’s size, another definitive feature is it’s colour scheme.

Head: Small and round head with wedge-shaped yet slightly oval, wide muzzle. The nose transition is stopless and is below the eye line, the slightly convect nose is also wide. The recurring theme of singapuran head is slightly round, so the chin and whisker pads follow on this fashion, without losing their well-developed, chiseled appearance. it is normal for adult males to have flappy cheeks.

Eyes: Almond shaped, large, wide open, slightly slanted and set at least one eye wide apart. They are coloured green, golden or hazel, yet never blue. Brown contouring must be present around the eye.

Ears: Large, broad at base and tapering to a pointy tip, set not too wide apart. Auricles are deep, unfolding slightly. Ears’ outer rim continues the head profile.

Body: Ranging from small to medium in size, compact yet not too stout. Singapuras are well built, proportional, and have a graceful appearance because of it.

Legs: Medium length, with developed muscles and bones. Striping may be visible on the inner surface. Tail: Medium to long, always narrow but not too thin, starting moderately broad and pointing to a blunt tip.

Colours: Ticked, with hardly visible brown tabby pattern. Each hair has at least four interchanging colours, namely the dark brown and ivory. An “M”-shaped spot adorns the forehead, eyes and nose are outlined with darker colour. Paw pads are dark pink, and auricles are pink with ivory hair. Legs are have open circlets of dark colour on them, and a dark stripe may appear on the spine.

Home singapuras have a tender, careful and level character. They are rather sensitive yet sanguine pets that value your care and attention, forming a strong bond and following the owner everywhere. Being quite mobile, active, bouncy and playful even after years they fill children with fascination and joy. Among others it is fond of standing on back legs, able to stay alone for some time and is vulnerable to cold. Singapuras reach puberty at the first year of life, adult females are known for their extensive maternal instinct. A typical litter consists of 2 to 3 kittens. Singapuras are easy to look after: you only need to brush them weekly to keep their coat at it’s finest. One should note that these cats are extremely heat loving, and you’d better cut the outdoor walks if it’s lower than 50’f

Breeds relative or derived from Singapura: none