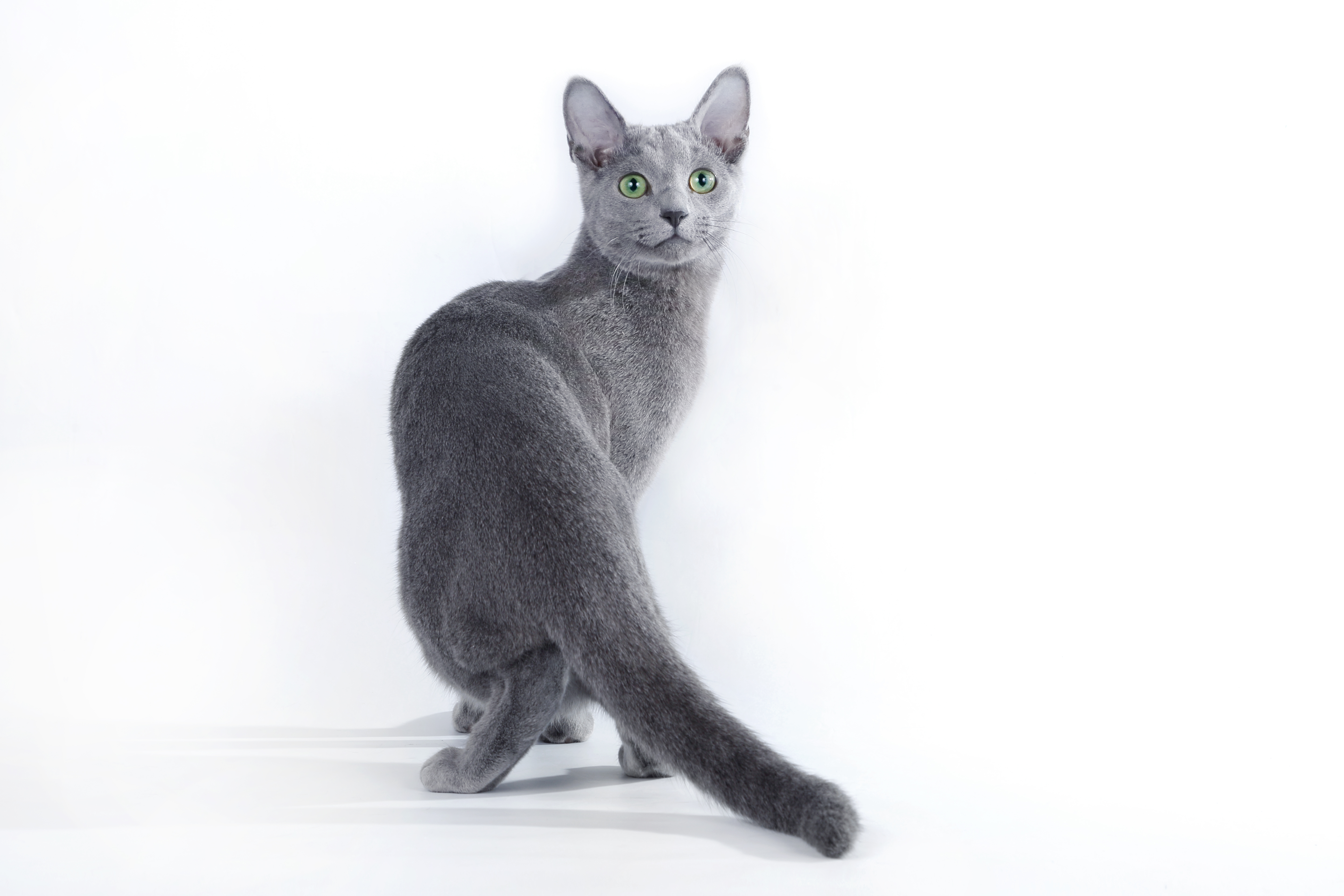 Many believe, that his breed originates from old, somewhat longhair blue felines inhabiting the coasts of White sea, notably the Arkhangelsk ares (hence one of the names, Arkhangelsk Blue). Legends tell about these cats in Tzars’ residences, and sources have that the first notion of Russian Blue dates back to Peter The Great and his Vasya, a royal court’s darling. Same sources claim that Catherine II the Great gave it’s kittens to foreign emissaries as gifts, and if this is true, first blue cats in Europe may come from this royal bloodline. Another, even more exotic, story tells of cossacks charging into battle on horseback with blue cats on their shoulders While either claim is hard to undermine, there is a more believable, if slightly less exotic, version of blue cat’s origin: on year close to 1860 a merchant vessel, be it russian or english, has brought a number of these cats to Britain, and by 1871 blue cats had a number of well documented cat show appearances. Lady Simpson’s 1903 “The Book Of The Cat” tells of Carew-Cox, an Essex-based fancier who has brought Olga, Padosha, Yula and Dvina cats with her, as well as a male Lingpopo in 1901. These animals were the base for british blue cat breeding program.

An alternative name “Maltese Blue” hints at these cats’ mediterranean origin, and some historians agree with that, but the name we have today is official since 1939 and not much can be done about it.

The breed was at a decline in middle XX century, and only after WW2 attempts to stop the bleeding were made. A cat was crossed with british shorthair and siamese blue point. The breed’s future became brighter, although in 1960 a movement of breeders in Europe and mainly in UK arose, willing to restore the breed to it’s original, shorter and darker look, while US breeders were fine with a new, sleeker type with narrow head, thin body and legs, and a lightert shaded coat.

We have to thank first british Russian Blue Fancier club from 30th years of XX century, which has developed the first official standard in 1939, thus also cementing it’s name. These days Russian Blue are considered a rare and precious breed, albeit very popular in the USA and Japan.

A medium sized cat weighing from 6.5 to 12, known for its elongated body and wedgy head with a signature expression created by sharply defined whisker pads.

Eyes: Large, almond shaped, slightly slanted and wide set. Adults at the age of 2 or older should have emerald green eyes, while kittens are allowed to have their eyes hued yellow.

Ears: Large, high and straight set, wide at base and tapering to a sharp tip. Ears have very thin and delicate skin.

Body: Medium sized, elongated, thinly boned and elegant, yet not oriental and fit.

Legs: Long and thin, yet also quite strong.

Tail: Medium to long, straight, somewhat broad at base and tapering to a rounded tip. Agile and flexible.

Coat: The defifining feature of the breed is it’s coat: short, extraordinarily thick, soft doublecat with guard hairs of the same length as primary coat. While not clinging, it is still shiny and very plush to the touch.

Colours: Solid pattern and blue colour, although development efforts in Australia and New Zealand have brought black and white variations.

Russian Blue passes as a somewhat shy feline, their character known to be very reserved, austere even. Known for their self-reliance, they are not attention hoarders and demand little attention. Only attached and tender with their owner, they ignore other humans, being at times imperative and always standing up to any sign of oppression from anyone else. Naturally good hunters, Russian Blues are best kept separately from pet rodents, lest the latter may become formers' prey. Other cats, especially of the same breed, are almost guaranteed friends. These felines feel comfortable in an urban flat, have a quiet voice and a loud purr. Ambient noise spikes are recognised as a threat though, and cat's natural reaction would be to climb higher and assess the situation from up high. Unlike many other breeds, urban blues enjoy walking on a leash when it's not wet or cold.

This breed's coat is easy to keep clean, and they don't lose much hair even during th emolt, and all you have to do is give them a thorough pet with a suede cloth or special mitten. It is however important you do not let these blue cats rest in direct sunlight for too long, for it makes their coat pigmentation burn out, resulting in an unsightly "rusty brown" coloration.

When planning your Russian Blue's rations take care to make it balanced and include enough vitamins, but skip most of the iodine, which is known to darken their coat.

Breeds relative to or derived from Russian Blue