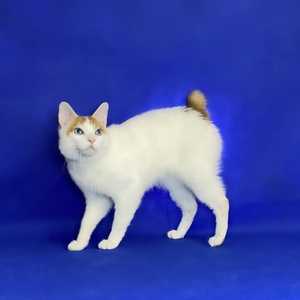 This breed has at least a millennium-long history, it's first notion is a number of pictures around the walls of Goto Yuki temple, Tokyo. The carved image of a short tailed feline with it’s paw rising is also there and it is dated with 1st century AD. A feline like that is considered to be a good omen in Japan, and it used extensively in Netsuke. By placing a figure like this facing away from the door they symbolise a warm welcome. A three-coloured bob-tailed feline is also traditionally named mi-ke and is supposed to bring good luck.

Some centuries before bobtails were considered both cultic and luxurious, with only emperor’s dynasty and higher nobles able to have them at home. A legend says that their tails were chopped so that adult felines don’t turn into monsters, actually the tailless gene has probably originated in China and was imported with some cats to Japan, the genetics are traced to some chinese and korean origin. Concerning it’s modern history, the US-fancier Elizabeth Frere came up with a development programme for the breed in 1960-s, and it was her who has first imported a Japanese Bobtail to the USA, something that was completely restricted til the end of the WW2.

The first standard was developed by CFA, while FIFe and other European organisations have accepted it by 90-s, despite the fact that first Japanese Bobs were brought there in 1981.

An averagely built feline weighing 5.5 to 9 lbs. It is known to have a fit yet flexible body, elongated body and a “jumpy” carriage caused by shorter back legs. The definitive feature however, is a short 1 to 3 inches long winding “pompom” tail.

Глаза: Large, oval, wide open and set at a slant. The colour should harmonise with coat colouration, yet odd-eyed cats are valued the most.

Уши: Large, set wide and straight yet may appear slanted when undisturbed, which is fine so long they are not turning inward. Ear colours should match the body colouration.

Тело: Elongated, which makes it appear quite elegant despite its developed muscle structure.

Ноги: Long, thin yet firm. Hindlegs are noticeably longer than the front legs.

Хвост: Expectedly short, less than 3 inches in length. Twisted tails can measure up to 5 inches if they were to unravel. Thick vertebrae are merged together, usually excepting the first one. Some columns may be less rigidly joined, dividing tail visibly in 2 parts.

Tail is well coated, hair is longest at the tip, forming a pompom called "chrysanthemum bud" in japan.

Coat: Short hair, soft and silky to the touch. Scarce undercoat is present.

Colours: Can be either tabby or solid, all colours permitted save for chocolate, lilac and colourpoint. Bicolour and tortie cats are considered of higher value, of them the Mi-Ke - the black-red-white coloured cats are the most sought after. Spots must be vivid and sharp.

What they lack in tail length they make up for in mobility, playfulness and energy. It’s jumping and climbing skills are to be reckoned with, so are the skills of hunting and swimming. It’s character is level and affectionate, bobtail would choose a single family member as a master.

To the other pets and dogs in particular, these felines are not always friendly and would ignore them most of the time. Japanese Bobtails live nicely in a smaller flat and are known for their habit of raising a paw while sitting.

Japanese Bobtails are some of the easiest cats to have at home, they should only be brushed on a weekly basis except for the molt season, which is not known as intense.

Balanced diet is recommended, only top tier dry feeds and preserves will do