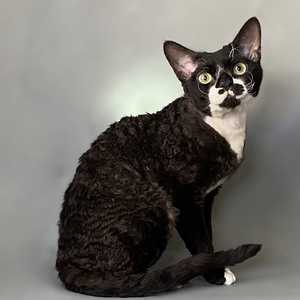 The breed’s name itself gives us a hint already - these felines hail from Devonshire, where in 1960 a stray cat with curly hair was to be found. It was picked up by Ms Berill, who has thought the peculiar kitten to be so fancy she would breed it with a tri-color cat. The resulting cat was named Cirly (after the word “curly”). Later attempts at developing the breed were far less successful, as if Cirly’s spring, to everyone’s wonder and dismay, wouldn’t inherit the curly coat. 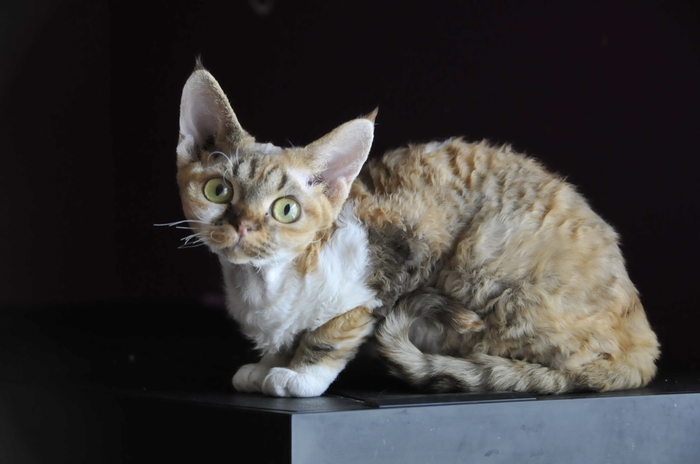 This means that parents had different and more importantly recessive mutative genes. As such, to save the breed they had to take up depraved crossing, in which Cirly himself, his mother and his daughters took part. Despite being rather successful in term of producing curled coat litter, this method gave spasticity to every devon rex produced. This flaw was enough for breed to not be acclaimed immediately, and it were english, french and american fanciers combined who have fought the malady. Still it took years for the breed to be officially acclaimed. The first organisation to give recognition to the breed was european GCCF. The FIFe has followed in 1967, and soon the breed’s renown would skyrocket in Australia, New Zealand, Columbia and even South Africa. They have first appeared in USA in 1968, and 11 years later the CFA would give it’s acclaim to the breed as the last major organisation. Before that, however, devon and cornish rexes were bred together as if they were thought to be the same breed. The champion class was open by the breed in 1983, and the finalised standard was developed by TICA in 1988.

Devon rexes are frequently called “elves among cats” for their distinct appearance. This, primarily the large ears that sit flat on the edges of their elliptic head, big eyes and somewhat reverse-crooked nose. Much unlike other cats, these have short and twisted whiskers. Their legs are long and strong, their pads are small and round, and all of the above enables them to jump surprisingly high. These cats weigh 5 to 9 lbs, and are neither large nor too small. One of their defining features is their coat, which is short, wavy and does have an undercoat. Apart from other rexes, these are well-built and have long, somewhat-thin legs. 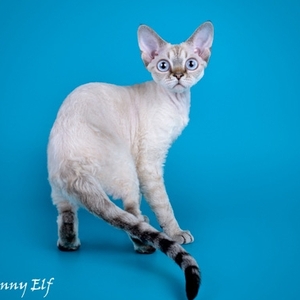 Head: Rather small overall, short and broad like a dull wedge. It has angular and prominent contours, especially so on cheekbones and jaws. Muzzle is well defined, long and wedgy. Nose is short, with a notable “stop” on it’s way to forehead. Strong chin transitions crisply into cheeks. Whiskers and brows are bending, stiff, and are medium in length.

Eyes: Large, oval, wide set and are at an angle to outer ear edge. Colours are clean, vivid and harmonious with coat coloration.

Ears: Very large and broad at base, shaped as a sharp tipped cone. Very low set and covered in thin and fine coat. Lynx tufts at the tips are present. Legs: Long, thin and high. Hind legs are longer than front ones.

Coat: Short, soft, thin, curly or wavy. Guard hair may not be present, and their coat is not as streamlined as that of Cornish, more reminiscent of sheep or poodle hair. FIFe allows some devons to only have undercoat on belly. Much like cornish, devon hair grows slow, yet is mature enough and judgeable by the age of 6 months. Colours: All colours and patterns are allowed, white can either be missing or prevailing.

Their look is just as unique as their attitude: they are unnaturally tender and require constant communication with a human, apart from which they would generally not exist. Devon cats savour physical contact with the owner, and are prone to following you everywhere, sometimes even sleeping on your shoulders or on anyone else they can find. Apart from that they possess a lively and friendly character, radiating benevolence towards anyone in reach, including dogs. They adapt with no fuss to any living space including flats. Their silent and soft voice makes devon a nice companion. It is notable that when happy, they will wave and bob their tail like dogs. Firstly you should monitor their health as if kittens, unlike their elder kin, are vulnerable to diseases. To stay away from inheritable flaws one should make a research on particular feline’s genealogy. Their close to non-existent coat poses no protection from elements, as such they are better kept in a maintained temperature space, free from excessive vapor and wind. If you have to take them somewhere through the cold - you’d better cover them with a nice warm knitwear. Their coat, apart from how it is described, is easy to maintain. Petting down the coat growth and washing are more than beneficial. Their ears are not that trouble free, and may accumulate dirt with the time, be sure to clean them with a special solution. These cats are hypoallergenic, according to american fanciers 50 to 70% of people suffering from allergy may have a devon rex at home without any trouble.

Breeds relative to or derived from Devon Rex: Pudelcat