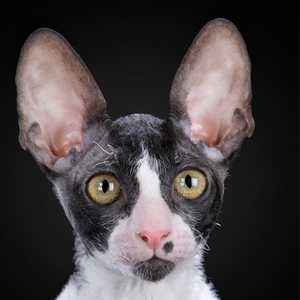 Cornish Rex originates from Great Britain, and as it is common with british cats - have their inception date defined to a concrete date: July 21st 1950, the day when a cream-colored, curly-coated kitten was spotted in Bodmin Moor’s litter of run-of-the-mill farm cats. Nina Ennismore, previously a cat fancier, knew immediately she is on the verge of a breakthrough, and came up with a breed development plan involving interbreeding and crossing with siamese, burmese and british shorthair cats, in an effort to preserve unique coat characteristics. As one could expect, English felinology was the first to recognise Cornish Rexes as a breed in 1976, other notable federations followed suit in their due time, despite first Cornish cats being imported to France in 1962, and american fanciers coming up with their own development programme in 1957.

American development, the one including Siamese and Oriental crossings, is responsible for the lighter, slender type with rounder head and bow-like spine, more prominent facial features and ears. English type is comparatively heavier, their head being pointier too.

The breed remains popular throughout Europe and the USA, the latter saw a cornish-only show in 1980.

Thin-boned, agile cat of medium size (10 to 5 lbs). Known for a slim, flexible build with its arching spine and inverted belly. Resting on long, straight legs it has a whippet look. The defining feature, however, is its soft, curling hair.


Eyes: Medium to large in size, oval and slightly slanted in shape. Eye colour must compliment that of coat, and be bright and clear.

Ears: Large, conical, high set, broad at the base and tapering to a rounded tip. Auricles may be covered in thin, silky coat (FIFe), or devoid of any vegetation (TICA).

Neck: Medium to long in size, thin and elegant, with developed musculature.

Body: Small to medium in size, quite long and elegant overall. Muscles are well developed, hard and powerful. Chest is adequately large.


Legs: Long, thin and straight. Thin bones and prominent muscles. Hindlegs are longer than the front ones.

Coat: Short, thick and soft, curly throughout the entire body, including limbs. Often wavy, their coat lacks guard hair and is instead 100% undercoat, which lends to its satin, silky touch and velvet look. Just as curliness, wavy pattern should be even throughout.

Cornish Rex is a lively, active, playful and at times eccentric feline. Agile and articulate, it will routinely grab their human by hand, play and pat themselves with it. Quite sociable, they are vocal and upbeat, especially if there are multiples of them or any other pets present, much less so if they are alone. Easily trained, Rexes are not aggressive or vengeful, being instead tender, caring and able to wave their tail in a dog-like fashion as a display of joy. Cornish cats are considered hypoallergenic, and may be recommended to sensitive people. Females may be very fertile and fall in heat multiple times a year, kittens grow up and mature rather fast.

Cornish Rexes may live in a city flat, which may even be beneficial since they are rather cold-sensitive. It pays to protect your Cornish Rex from cold, and maybe let them sleep under your blanket during winter. Otherwise these cats are a breed to look after, all it may take is a per-week brushing with a special glove, your hand will do in a pinch. Curly Rexes hardly ever molt.

These cats eat quite heartily, oftenly, and may overeat given the opportunity. Careful nutrition planning is required. 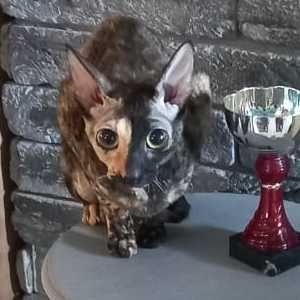 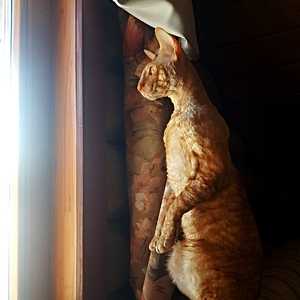 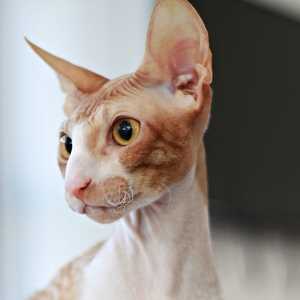