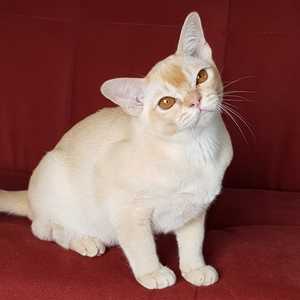 History of the breed.

Burmese - one of the most charming feline breeds, known for it's «golden» temper. The origin of the breed is rooted in the East, and is tightly braid with the history of Thai. The first mention of Burmese cat dates back to XV century, the times when it was called a “Copper cat", and described like that this: “The character of the copper catsurpasses the character of any existing breed. Their fur is vivid as copper, and their eyes shine brightly ike the sun in zenith. By virtue of these cats all evil and danger disappear forever... In general, Burmese cats were held in the richest houses and temples, for it was considered that they bring prosperity and fortune.

The development of an independent Burmese breed was, in fact, an accident. In 1930-s Joseph Thompson, a retired medic from San-Francisco (California, USA) was given a special gift - an eastern cat called WongMay. It's appearance differed so much from what he has ever seen before, that he has decided to form a breed and even invited a scientific group from local university to develop a breeding program.

By the year 1934 first standard and specimens of the breed were introduced to CFA's legislative group, and in two years the breed was given an official recognition. For a breed, which development started only in 1930, is was a stunning success. Breed's renown was like a sky rocket at the moment, with public demand was times more than availability.

In 1949 three Burmese cats were brought to England, where they attracted considerable numbers of breeders. By the year 1955 Burmese Cat Club was formed, and - Burmese Cat Society in 1979. English breeders produced a Burmese cat which was slightly different from the American standard. That was the beginning of the European Burmese - a cats with refined lines and lighter bone-structure.

Subduing breeder's hearts in Britain and Europe in early 50-s these cats were brought to Australia, becoming the most popular shorthair, even leaving abyssinian and british shorthair behind.

In the late 90-s Burmese cats appeared in Russia, and these cats gain more and more love of people every day. 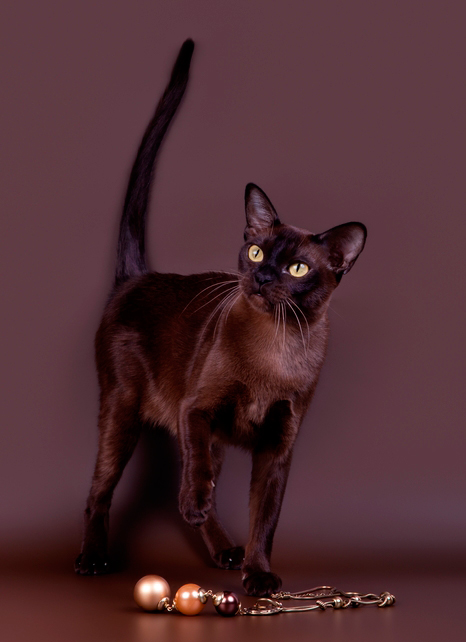 The cat is of a medium size and weights around 3,5-6,5 kilos. European (British) Burmese cats have eastern roots and have a rather elongated and elegant torso, with rounded contours, solid boning and well-developed musculature. In spite of their small size, Burmese cats are well-built and unexpectedly heavy. Their shiny short coat makes them look thinner than they are. But a Burmese cat should never resemble a British shorthair cat.

Head: Has soft rounded contours and has a form of a short blunt wedge. Wide, high cheek-bones are well pronounced. Visible nose break. Well-developed short muzzle. A jaw is wide at the base. Lower jaw is srtong. Chin is firmly rounded.

Eyes: Bright and lustrous.Big, set far apart. Top line is slightly curved with an oriental slant toward the nose, lower line of an eye is rounded. Clolor – from yellow to amber. The deeper the color - the better.

Ears: Medium in size. Set well apart. Slightly tilted forward. Broad at the base. Tips are slightly rounded. The outer line of an ear continues the shape of the upper face.

Body: Medium in length and size. Hard and muscular. Heavier than it looks. Chest is strong and has rounded contours when observed from the profile. Back is straight from the shoulder to the rump.

Legs: Are rather slender.

Tail: Straight, medium in length. Not thick at the base. Tapering slightly to a rounded tip.

Burmese have an active and energetic temper, they are friendly and devoted to their host, that's why they are often referred to as “dog-cats". Burmese cats are the Grace, the Elegance and the Tact as it is. Their boundless love and a touching, tender appeal to their master leaves you amazed and surprised. They are very curious and active, never feel rage or aggression towards human, neither show claws nor scratch you. It is normal for them to rest on your hands or by your side for hours. Loneliness makes them sick, so it is enormous joy for them to have any kind of playmate to rejoice with, a cat or a dog, or even a kid will do. This feature makes it wise to take two Burmese at once. Kittens won't feel sick when you are out, and you will have fun watching them play together. What is interesting - adult cats are even more selfless in game, than their younger kin. This mood affects them for all their life, which may be as long as 16 years.

These felines are easy to care for, you just want to groom them with a brush on a weekly basis.

Breeds, originated or related to burmese 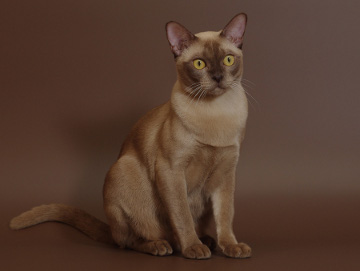