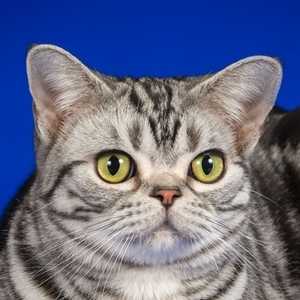 Origin of the breed:

There is a lovely story about them, it tells that while on his journey to America, Columbus has brought a pair of cats to all his ships, so that they may keep mice at bay. If the story is true, the ancestors of what we now call American Shorthair were brought to New World this way back in XV century. A different version says that the first American feline has arrived here with puritan pioneers a bit later, in 1620. Whichever version is true, their landing in an undiscovered land has made them bigger and stronger, and with much denser and harder coat than their european kin had. After some time these cats were to be seen everywhere, at ranchos and farms, by barns and houses, locked in a constant struggle with rodents of any kind. This nature, with it's conditions, has forged them into a more able, healthy and balanced breed.

However, these breed's story will only become documented in the beginning of XX century. In the year 1904, CFA has registered a black smokey cat called Buster Brown, whose lineage could be traced back to british shorthair cats. British, as well as Birman and Persian royal cats were brought from over the ocean, and by crossing with local street cat gave birth to American (originally - Domestic) Shorthair breed. Soon after, a strict breeding programme was developed to sustain the breed and it's difference from european ancestors. By the year 1930 the progress was noticeable enough: in a small number of generations fanciers have produced a large number of paints. In other words, the breed's future was bright and clear from there on.

By the year 1950, CFA has published the first Domestic Shorthair breeder's catalogue, with 50 specimens of the breed. This name was then assigned to the breed in 1966, and was used for long time after. To add more, CFA has been using this name for American Shorthair-looking cats till 1985. Nowadays, only purebred specimens are allowed to breed. The real victory for breed lovers was the CFA's “Best Cat of the Year" title assigned to a splendid classic brown tabby cat Shawnee Trademark. In 1984, Hedgewood's Greatest American Hero (Mister H to his friends) was given this title, and in 1996 Sol-Mer Sharif has done that again. Nevertheless, International Cat registries Federation (or FIFe) still would not recognise the breed. American Shorthair are incredibly popular in Japan, and are met much more often there than in Europe.

Average or bigger sized feline, with weight ranging from 3,5 to 7 kilos. They are well-built, with bones tough and look rough. Males are, typically, much larger than females, because of significant gender dimorphism.

Head: medium size, broad, rounded. Rounded skulls, cheeks are full and well developed in studs. Profile with a modified stop goes to the muzzle – which is rather short and angular, broad, and has a squarish appearance. Nose is medium-short. Chin is «square», full and firm; jaws are very strong.

Ears: Medium size, not too large at a base, wide-set, covered with very short hairs; tips are rounded.

Neck: In proportion to the body, medium-short, neither too short and thick no too long and thin, muscular and strong.

Torso: Medium-large, rectangular in shape (length is bigger than height), rather than slender, but well rounded and proportionate. Broad chest, especially in males. Shoulders are well developed. Boning is medium, but musculature is well-knit and firm.

Legs: Muscular, medium in proportion to the body, straight; rather strong.

Tail: Medium length, thicker at base, tapering from well-rounded rump to a rounded tip. Taper is slight, neither blunt nor pointed, carried almost level with back, in proportion to body.

Coat: Short, even, dense, rather hard, lustrous and close-lying. In winter dense undercoat is possible.

Color: More than 60 different variants of color, with the most popular being black silver tabby (blotched, mackerel and spotted). Chocolate and lilac colors are not permitted.

This is the case when interiors are not unlike exteriors: cats are mildly active and have a balanced, easy and calm personality with expressed devotion to their master. Felines are predictable and are not prone to aggression. Being talkative and independent, they adapt with ease to any conditions and surroundings - either people or pets, and even birds. They are joy to travel with and to train, for they are docile and obedient. While not being a daredevils like some other cats, they savor long siestas and have a tendency to gain fat. Puberty is as early as 7-8 months.

A weekly grooming with a rubber brush is enough. In moult period daily grooming is required.

Washing is recommended when outdoor walks are present, and is required prior to cat shows.

Balanced ration is required, as well as strict observation of food quality and quantity, to prevent surfeit and obesity.