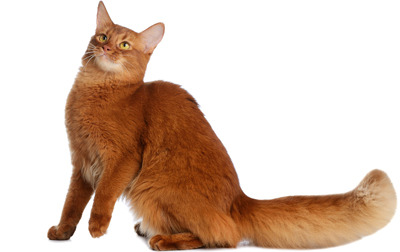 Somalian breed is named after Somalia, a neighboring state of Ethiopia. The thing is that the breed itself does also “neighbor” the Abyssinian, a natural ethiopian breed. The breed itself does actually come from USA and Canada, where some fanciers have noticed the semilonghair kittens sometimes appearing in abyssinian litters due to a cross with persian or angora felines. Many a breeder has thought it to be a flaw, but not Don Richings, Mary Meiling and Ken McGill from Canada, as well as Evelyn Mage from USA. They were sure they are dealing with new breed they labelled as Somalian. The breed was first showcased in 1972, and in 1978 it was acclaimed by CFA. They were brought to Europe in 1979, with the first european organisation to acknowledge the breed would be FIFe.

Somali is a beautiful, truly royal feline with elongated flexible body, wedge-like head and a very fluffy tail. It resembles abyssinian in every aspect, yet has a longer hair.

Somali is a semilonghair breed, it weighs 9 to 10 lbs and is rather fit for its weight and size just like the abyssinian. It is not affected by sexual dimorphism as much as some other breeds, yet the males are still bigger than females. Somali, being so elegant and harmoniously composed, are the shining beacon of a feline that has accumulated the best traits of it’s kind, preserved for thousands of years. It’s definitive feature is it’s unusual coloration, that is both iridescent, dense and warm, having no visible pattern. A paint like this may only be formed by a ticking, a case when every hair has different colour in a number of areas. The spine, including a line running along the chord, tail tip and heels are noticeably darker, while belly, breast and inner legs are brighter. This features define their unique colour scheme.

Eyes: Large, shiny, almond shaped, and very expressive, set wide and at a slight slant. They are coloured in clear and vivid amber or green, latter being preferred for silver coats. Eyelids are highlighted by a darker outline, and eyes are surrounded by a defined, brighter ticking-toned spot.

Ears: Large, broad at base, wide set and tapering to a rounded tip. Slanted slightly forward, they give Somalian an attentive, listening look. The outer surface is covered in a short, ticked hair with a signature “wild” spot in the middle. Some cats have “brushes” in auricles, and lynx tufts are common.

Body: Known for it’s fit, but not rough musculature, Somalian has an elongated, proportional, balanced and flexible body. Round chest, paired with a slightly bending spine give the cat a “jumpy” look.

Legs: Long and thin, they are however quite muscular.

Coat: Medium length, thin, very soft and growing shorter on the head, front legs and shoulders, and it is semilong on the spine, abdomen and flanks. Collar, trousers and tail may almost be considered long. Colours: Ticked hair has interchanging colour stripes throughout its length, counting from 3 to 8, they should always have a dark ring on the end, forming a Ticking Tabby pattern. Colours, however, may vary and there is a number of acknowledged variations:

Ruddy, or Rabbit - with dark and apricot striped hairs.

CFA only allows ruddy, blue, brown-yellow and sorrel coats, while european organisations allow for a plethora of options.

Kittens are born in bicolour: brighter coat on round parts and blacker coat on legs. Ticking, as well as coat length, takes time to appear, and should be fully developed in a year from birth.

Disqualification on shows: Non-prominent or missing ticking; ticking rings on legs and tail; white spots on body, except those on whisker pads and chin; uninterrupted “necklace”. 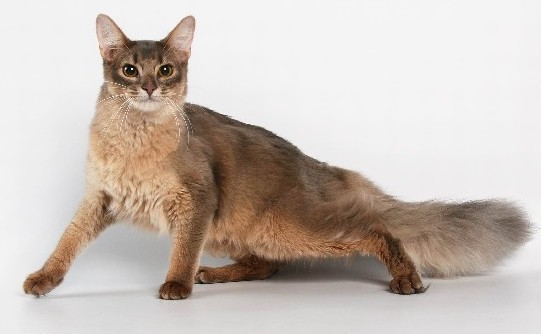 Somali is a lively, playful and an active cat. However, it is rather calm and sedate when compared to Abyssinian. Being friendly and tender it lives well with other pets, dogs and children, with siamese and burmese being the only exception. It is not too intrusive, yet favors attention. Due to an acute hunter’s instinct they won’t like it in a small flat, open-air strolls are strongly recommended. To add more, they do prefer warmer climate.

Somali are not too tricky to look for, though you would still have to do something. Their coat won’t clot as much as some other breeds’ does. Still, you may want to brush regularly, on a weekly basis at least. During the molt season, you should comb it daily. 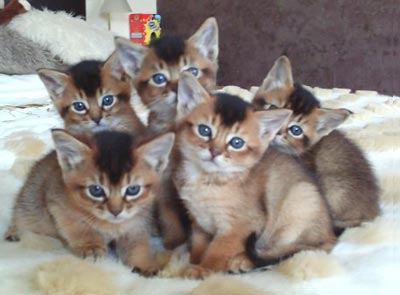