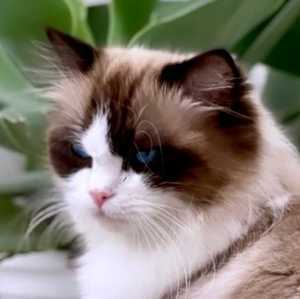 First things first, ragdoll cat does actually resemble a rag doll. It is known for it’s surprising muscular inefficiency that lets them slouch irresistibly on human’s hands like a marionette. It was Ms. Pennels from Riverside who has first pinpointed this feature. A white angora-looking feline named Josephine was born in her house circa 1960. Actually, she was part persian angora and part burmese, she and her litter have quickly drawn fanciers attention, who had to come up with some novelty inbreeding technique to concrete the unique trait. Their visual timidity and elasticity are backed by their calm, obedience and a complete lack of aggression. There is a theory that Josephine’s accident during pregnancy has left an imprint on both her and her soon to be born offspring’s neural system, or it is possible that ragdolls are just ragdolls, because their parent’s generations were always cool and took life easily.

The breed was given it’s credit of recognition in 1965 USA, and in 1971 Ann Baker has founded the International Ragdoll Cat Association. The first ragdoll cat to cross the ocean and arrive in Europe were also from her cattery. England has got a ragdoll cat сlub in 1987, and France has followed in 1993. The FIFe has given the breed it’s admittance in 1992, although the breed is still rarely met anywhere outside US.

A rather large and heavy feline, with a fierce looking, well-developed muscles. It weighs 10 - 20 lbs with males being much bulkier than females, although there are instances of females weighing around impressive 30 lbs.

Head: Medium sized, wide wedge shaped and defined by smooth outlines. The skull is rather flat, while the forehead is slightly convex. Cheeks are prominent, well developed, resting on wide jaws. In harmony with the skull, the muzzle is average in size, length, it is well developed and slightly wedgy in shape. The chin is strong and prominent.

Eyes: Large, elliptic, set wide and at a slight slant. Eye colour should either be blue or vivid baby blue.

Legs: Both hindlegs and forelegs are of medium length and not overly thick. Muscles are well developed, bone structure is fairly typical, hindlegs are longer than the forelegs.

Tail: Long and fluffy, rather wide at base and tapering to a narrow tip.

Coat: Medium length, thick, fluffy and well clinging, soft and silky to the touch. When ragdoll moves - hair tends to separate into strands.

Colours: Ragdolls may have any colourpoint variation, including those with white: mitted (white spots on nose, chin, legs, chest and belly) and bicolour (an inverted V on the head, white legs, chest and belly). Ragdoll kittens are always born white, disregarding their genetic inclinations, and by 10th day they start getting their lenghty paintjob, sometimes finishing it by an age of 1.

Ragdoll is a very pleasant companion, unnaturally chill, level, obedient and kind it is also playful and smart enough to adapt to any living conditions including city flats. It shares living space with other pets including dogs with ease. While not being intrusive, it will enjoy resting in your arms acting like a real rag doll. Despite being rather smart, these cats completely lack any hunting instinct, and are prone to deal with troubles by fleeing and hiding. Ragdolls are always silent and will obediently freeze in any position you could possibly desire.
This breed has a relatively late puberty, coming at 3 - 4 years.

Ragdolls are the cats that should always be treated with care and attention to its traits.
For example, you should keep in mind that they are completely defenceless and won’t retaliate no matter what, and can’t even flip themselves in the air and land on feet like all other cats do. Their hair should also be brushed on a regular and frequent basis, yet never in the reverse direction. The best tool for that is the metal brush with smoothed teeth. During the molt they should be brushed even more. It is also not advised to give them too much a bath time, as if they generally dislike water.

Being a rather large feline, ragdoll does eat more than you could expect. A kitten would chew up around 3.5 oz of rations, while for an adult it takes around a whopping 200 - 300 oz. Their rations should consist of either premium class dry food or preserves. They can be easily fed homemade food, if that means specialty cat food, not your leftovers.

Breeds relative to or derived from Ragdoll: none 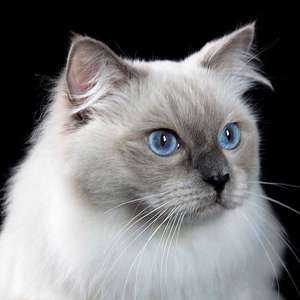