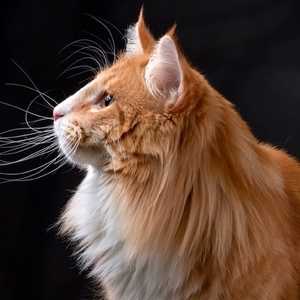 Norwegian forest cat is claimed to be the national breed of Norway, although most of it’s population is concentrated in Sweden. However, felines like this were inhabiting the whole Scandinavia ever since the X-XII AD. The legend says that two white felines like these were harnessed in the chariot of Freya - goddess of love and fertility. There is a yet another notion of them in the Scandinavian mythology - in Prose Edda a feline is described as so fluffy and big not even the mighty Thor could lift it.

Apart from myths, the origin of these cats is still unclear: while scandinavians themselves state that these felines were around for ever, the specialists guess that they were brought by Vikings from either Caucasus or Anatolia, and were used as micers in the process. A yet another version claims that they were brought along with some central-european or asian tribes migrating to the North in pre-medieval period. Because of the Northern climate these cats were forced to grow a thick and warm coat, giving a nice protection from cold and humid environment. Overall, the breed is supposedly a few ages old, yet is only developed since the 30-s. The fanciers were trying hard to reconstruct their appearance according to the descriptions and images from X-Xll AD. The breed was given an official acclaim by FIFe in 1977, and Pans Truls became the first registered norwegian feline. Nowadays the breed has an official status in most organisations, it is very popular in Europe both among fanciers and pet owners.

A medium to large sized feline weighing from 7 to 20 lbs. Being strongly affected by sexual dimorphism, this breed’s males are noticeably larger than females. It’s strong and fit, elongated yet thick body resembles the one of a lynx, as well as siberian, maine coon and turkish van. The breed’s defining feature is a double semi long coat, as well as powerful talons. Norwegian is the only breed able to climb down a tree or any other steep surface with it’s head down.

Head: Form resembles equilateral triangle with smooth contours. Forehead is high, almost flat and sloped back, profile is straight without stop. Muzzle is triangle, medium in size, soft contours, its line continues the line of the scull. Cheekbones are not protruded. Nose is of a medium length. Jaws well developed. Chin is strong, in its form closer to quadrat more than to round form, but, in any way, not pointed.

Eyes: Big, oval or almond, set slanted. FIFE accepts all the colors but pure green or pure yellow is preferred. White cats can have green, blue or even add eye color. (TICA)

Ears: Of medium size, broad at the base, with slightly rounded contours. Set high on the head and slightly arched forward, as if listening. Set wide, outer edge of the ear follows the line of the head. Furnishings inside the ear and “lynx” tips are desirable.

Neck: Medium in length, with well developed musculature. Most cats have dense ruff adound the neck.

Legs: Rather long, massive and muscular, straight in form. Front legs shorter than hind legs, and the croup is higher than shoulders. Boning is strong, substantial, hips are well developed.

Tail: Long, length is proportional to the body, can even reach the neck. Set high. Wide at the base, narrowing to the tip, bushy, beautiful.

Coat: Semi-long, double texture and very dense. Upper coat is smooth, brilliant, repellant and water resistent. Undercoat is woolly, dense. Coat is shorted on the shoulders, back and sides, gradually getting longer to the bottom. Well-developed so called “garnishings”: ruff, “bib” and “britches”. Cats usually get their full coat only when they are 4-5 years old.

Colors: Color could be solid, smoke, silver, tabby ar bi-color. Any color is accepted except chocolate, lilac, colorpoint; any amount of white permitted.

Norwegian forest cat is a true child of nature, being as calm and suave as they are, they live nicely with other pets or kids, while strong and rugged build makes it for easy care for.

Tender to the owner and wary with others, hey would form a strong bond with you and demand attention, yet would always stay independent and freedom-loving. These cats don’t like it in the flat, and are best at doing what the nature tells them to - climb trees and hunt among trees. Naturally, to satisfy their hunting and climbing instinct, you may use cat-trees and toys, however these would not completely beat open-air strolls which make their coat shine. These cats like silence and have a nice voice.

Norwegian felines reach puberty by the age of 4-5.

The thick coat calls for regular and through cleaning, during the molt it is preferred to brush them on a daily basis. A metal comb with rounded tips does fine. Note that extensive bathing and shampoo using would damage their coat and natural layer of protective fat.

Breeds relative or derived from Norwegian: A cross between Norwegians and Maine coons, there is a theory stating that the latter are actually descendants of old Norwegians.