Pixiebobs mimic the appearance of North American Bobcat. Achieving this was the very task breeders took up, and to do so they started crossing local Felis Catus with tailless forest cats from both USA and Canada. Although, hybrids like this were always there, probably due to indiscriminate crossing of different feline species. In the year 1985 american fancier Carol Ann Brewer found some hybrid cats at Cascade mountain valley in Washington USA. The first kitten to be produced by the newly found had bobcat features, and was named Pixie, with added -Bob suffix it makes the name of the breed. It is notable, that only those Pixie-bobs descending from the original Pixie are considered purebred. 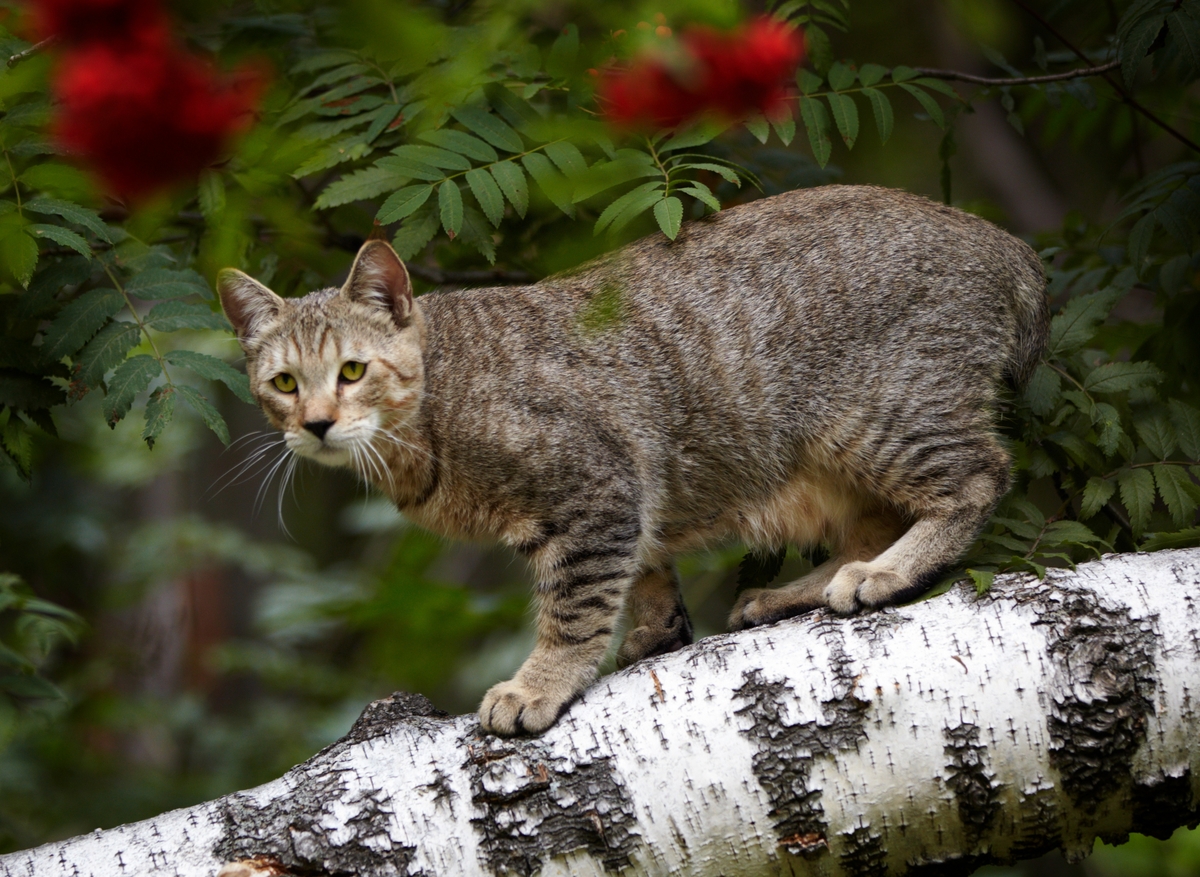 It took the breed quite some time to gain sweet official recognition, only in 1994 it was registered as an experimental breed, a year later however TICA has acknowledges it as a new breed, and since May 1998 Pixie-Bobs compete with mainstream breeds on system’s events. TICA maintains the edge on Pixie-Bob knowledge, and experts use it’s standards on other system shows.

Despite being accepted by French organisations as early as 1995, they remain very scarce in Europe to this day. The fact there are problems associated with exporting Pixie-Bobs from the USA contributes to this, cats also don’t enjoy long hauls. Also, a number of european organisations that have not accepted the breed persists.

A family-friendly version of bobcat: medium-large, stoutly built animal with weight ranging from 9,5 to 22 lbs. This breed is strongly affected by sexual dimorphism, males being much larger and heavier than females. The breed is defined by a number of features:
First being the tail, which can vary in length from the possible minimum of 2,5 cm to the borderline normal 15 cm, only those with tails longer than 3 cm are allowed to breed, however. Another interesting feature is their wild stature, Pixie-bobs do actually bob from side to side when walking. Closing this list of peculiar features is their wild look, defined not in the least by their triangular eyes, protruding brow ridges and lynx-tipped ears, as well as their specific cheek pattern. While not a breed-defining feature, polydactyly is allowed, and paws with 5-7 digited paws add to their wild, powerful image.

Head: Shaped as an inverted pear, medium to large sized with the crown being slightly rounded at around eyes’ edge, and forms a soft convex eyes-nape curve. The muzzle is full, wide, with round whisker pads and notable backburns. Cheeks are well developed and fluffy, nose is wide and also slightly convex, with brick-red coloured nasal plane. The chin is large, well developed and even beefy, adorden with rough, uneven hair. Chin and nose form a straight line in profile.

Eyes: Medium sized, almost triangular, quite deep and wide set, with thick hair tufts above. The colour ranges from golden to brown and dark, gooseberry green. Eyes are highlighted by a light, creamy outline, and an unnatural, almost hand-drawn line extends from eye corners to cheeks.

Ears: Large, broad at base, tapering to a rounded tip, set low and further behind. Lynx tufts are desired, and are more prominent in longhair variety.

Body: Massive, medium to large size, with protruding shoulder blades and arching, bending between the shoulders and hips spine. The hips are medium width, slightly higher than shoulders, and are sloped towards the tail. The chest is also wide, well developed and deep, belly sack is prominent.

Paws: Large, meaty and round, black or dark brown colour. All fingers, except rudimentary additional ones should touch the floor and point forward.

Tail: Short, with minimum length of 5 cm and maximum reaching the knee joint.

Colours: Bright spotted brown tabby with warm intense 4-layer ticking. Colours are brighter on the belly, where spotting must always be present. Random patterns of small to medium sized ticked spots is preferred.

This breed’s unique origin has, undoubtedly, an effect on it’s psyche. It’s imposing look hides a calm, delicate and somewhat shy demeanor. They are not phlegmatic, are unintrusive, smart and obedient, always up for games or caress. While never violent aggressive towards other pets, Pixie-bobs may show their cohabitants who is boss, and will occasionally deny any excessive familiarity. While their character has some canine quirks, including doglike loyalty to their owner and aptitude towards playing fetch, they maintain distance in their relationships with dogs in the house. While their character is rather soft, some “feral” traits persist, such as alertness and distrust to strangers, reluctance to meow, deep and loud purring, ability to roar when playing, and extraordinary finesse in their treewalking.

Rugged natural health and absence of food complaints make maintenance significantly easier. These cats are not vulnerable to cold and are not afraid of water, which turns washing into something trivial. Much like wilder felines, Pixie-bobs take quite some time to age and there are only a few of them in every litter. Because of their bias towards dominance it is optimal to have one as your only cat.

Breeds relative or derived from Pixie Bob Longhair: none