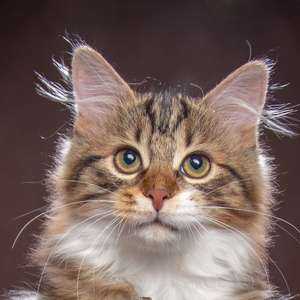 Kurilian bobtail is a natural breed, descendant of ancient tailless felines that inhabited Iturup and Kunashir islands since before XVIII. It is thought that the breed came to life by accident, as a result of crossing between japanese bobtails and cats brought by russian military. Those returning from islands have frequently brought charming shorttail kittens with them. Although, selectioners have neglected them until their numeral appearances in Moscow in 1980-s. Their systematical selection, however, has only begun in nineties. As such, Kurilian Bobtail is a long known breed, that has just begun it's path as a selected one.

Not all felinologists, however, agree on Kurilian Bobtail's origination, labelling them as russian subspecies of Japanese Bobtail. Still that they differ with their body build, muzzle shape and coat texture. His Majesty's fur farmers have long before used short-tail cats to keep rodents away from nutriments. Even now, japanese are dour in their attempts to claim the islands and deprive the breed of it's authenticity.

But let us think - Thai cats do also have roots in south-east Asia and Siam, Thailand, though nobody argues on the fact that they are different from modern, English-bred Siamese. Bobtails were not just dominant, but rather the only feline species on the islands, therefore, no interspecific crossings could take place, and still we see new coat colour and pattern mutations being discovered. There are two varieties differed by coat length: longhair and shorthair Kurilians. The breed was given it's first official standard in October 1991 by SFA (Soviet Felinological Association), and WCF was the first international organisation to give it official recognition in 1995. Soon after, the breed has gained recognition and popularity in Europe.

A medium-sized, compact feline with well-developed (prominent) musculature and a look of a wild animal. Kurilian bobtails share many traits with their japanese brethren, although their coat is denser and their body is more robust. All Kurilians are known for their expertise in jumping, still the most distinct feature of the breed is, of course, the tail - short, either bent or curled, evenly coated in longer (2-5 inches) fur. There are some of words to express the shape of tail, although none of them are scientific and their number is in direct ratio with expert's amd owner's imagination and symbolism.

Firstly - Kurilian's tail may look like a "stumpy", being less than 2 inches long and consisting of 2-8 flattened columns, coupled and immobile, bent at dull angles with sometimes protruding bumps. Another kind of bob is a "piggy-tail" or a "snail" - consisting of 3-15 crooked semi-relaxed columns, this construction appears to be as long as 2-4 inches. Being a different type of tail, "duster" is formed by 5-10 semi-mobile columns bent at blunt angles. The most peculiar sort being the "kinky" tail, which includes a number of "normal" columns, adorned by 4-7 crooked columns, bent at any angle saving any amount of mobility.

Head: In the form of equilateral triangle with gentle and rounded contours; in adults the form is close to trapezium, because of well determined whisker pads and rounded cheeks for adult males. Muzzle is rounded, with soft contours, rather broad. Forehead is flat, the forehead line is very soft. Skulls are broad, but not as broad as for Siberian. Chin in not massive, but strong.

Eyes: Oval, set a bit slanted. Color can be any shade from yellow to green. Kurilians with white coat and bi-colors can have blue or odd eyes. The color of the eyes does not depend on the coat color.

Ears: Medium size, set straight, rather wide from each other and rather high, on the distance on 'one ear' from each other. Tips are rounded, longhair variety has lynx tips.

Torso: Medium size, rather short, compact. The back is convex. Hips are high. Musculature is well developed.

Tail: Short, from 3 to 8cm, curved, crooked, kinked. The tail can have any direction of the curves. Can be agile and flexible. Set up the level of the back. Length and form of the tail should harmonize with the look of the cat.

Form and flexibility of the tail are not judged. Pompon can have any form, preferably set up the back level.

Coat: long or medium long, thin. Undercoat is well developed and dense. Length of the coat increases to the lower part of the body. Full ruff, britches, and lynx tips are preferred.

Color: Color can be solid, silver, tabby, bicolor. Any color, except chocolate, lilac, abyssinian and burmese.

Disqualification: Absence of tail, disfunction of the pelvic bones, erosion of the mucosa of the anus. Too short (less than 3cm), or too long tail (more than 12cm). Deformations of the spinal vertebrae. Any tail without a kink or curve.

Despite it's signature "on the wild side" appearance, Kurilian Bobtail is a warm, peaceful, yet an active and curious pet, if not a little bit too intrusive at times. Being such a strong and independent survivalist, this bad boy is not the one to nap at your knees. Feeling at home in an urban flat, and gets on really well with children and other pets, as long as they are not rodents or birds - these won't feel safe within Kuril hunter's lengthy reach. Doglike in his devotion and docility, this bobtail would usually choose the "main" owner to accompany. (Unlike his Karelian counterpart...) Being a natural talker, Kurilian does not only meow, but is also a master of a whole plethora of sounds including even the mighty roars.

Looking after a Kurilian Bobtail is an easy task, even if your bobtail is a longhair one.

One should groom the pet once a week at most , with rounded metal brush and with strokes facing the direction of fur growth. 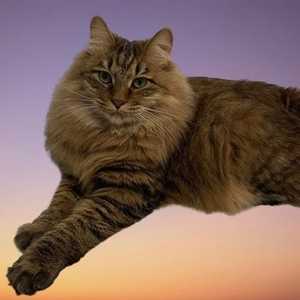