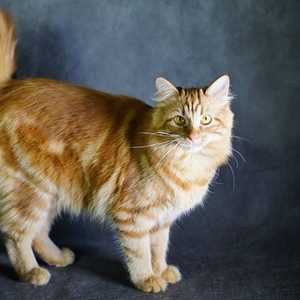 Karelian bobtail is a (natural) breed that originates (naturally) from Karelian region, Ladoga lake's islands to be exact. Their peculiar appearance is a result of a dominant mutation, which is believed to differ from the Kuriian's. It is possible that both Karelian Bobtail and Norwegian Forest cat share the Scandinavian street (stray) cat's ancestry. Despite the fact that the breed was only accepted in early 90-s, a lot of locals do know about this shorttail breed since the times immemorial. They appreciate and love them quite a lot, not only for their connoisseur-level mouser's skills, but also because there is a legend that shorter tailed cats bring happiness to their owner. This tales are probably the key and the reason they have still not perished.

Saint Petersburg's felinologists were first to find and describe a specimen of the breed. The breed was first registered and given official standard in the year 1992 in Russia, and was recognized by WCF in 1994. Today, Karelian Bobtails is extremely few today, and the breed is only recognized by WCF

Karelian Bobtails are not too large, although their gaunt frame makes them look bigger. The cat is strong yet elegant, sleek yet somewhat boxy with it's croup somewhat elevated. The main distinctive feature of the breed is the peculiar "pom-pom" styled tail. Heathy bobtails would always have their coat glossy and well clinging to the body, the other distinctive feature is coat's texture, which appears very dense and sometimes even stiff to the touch.

Eyes; Medium in size, oval, set slanted. Color should be even and harmonize with the color of the coat. Usually, the most common shades are green and yellow.

Ears: From medium to big size, erect and set high, open froward. Outer line of the ear goes straight up from the cheekbone.

Tail: Short, with fractures, 4-13cm long, straight or crooked, hairs on the tail form pompon. It is covered with a rather long hairs that are much longer, than on the body.

Coat: Semilong, undercoat length is almost even to the cover coat; the coat is dense, guard coat is hard and shining. Full ruff, britches and lynx tips.

Disqualification on shows: Absence of the tail, tail longer than 13cm, with a single hook at the end of the tail, regular length tail, absence of undercoat.

Karelian Bobtail are very friendly, tenderhearted and kind felines, affected to their home and hosts. Being non-intrusive and benevolent, they adapt quickly to new people and places alike, sharing space and interacting with children and other pets with no fuss. Although their voice is quiet and sweet, ringing more like a chirrup then meow, Karelians prefer to keep silence and attract people by touching them with a paw.
The breed's other unique feature is the ability to jump with all their legs simultaneously.

Their coat stays strong without any special procedures. All you need to do with a shorthair bobtail is to pet him with a special glove every so often. They benefit from their good health, a natural breed's advantage, and are free from inherited diseases.

Unlike their longhair brethren, shorthair bobtails are not the ones to mark their surroundings.

Breeds derived or selected using the named breed:
None

Some state that their name should be changed, as if it is mixing with Kurilians quite often.
Possible name variants consisting of finnish words: