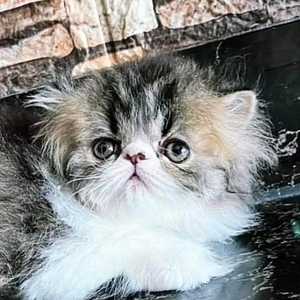 If you’ve been looking for the breed most popular, widespread and varied - you could not have missed Persians. Being among the most “domesticated” and refined felines, this one has a lot of breeding work put into it, resulting in a palette of more than 200 colours. Even in 20th century breeders were striving for newer and more exquisite variations, yet the global effort started much earlier. A few oriental longhairs were brought to Europe by Pietro della Valle from Persian-Turkish locales as early as in 1620. Not much later some of this “turkish” - some historians claim them to be angoras - felines appeared in France all thanks to Nicolas de Peyresk, the diplomat. Needless to say, aristocratie were soon all séduited by early persians. Longhair beauties found themselves in royal houses of England and France, thus always favoured by éleveurs and breeders alike. In early XIX Italian persians, the heritage breed as we would call them now, were crossed with contemporary English ones, brought from Turkey and France, then they were crossed with Angoran cats to refine hair quality, and modern variants emerged, rather different from what they’ve once been.

The royal breed has made its first appearance at London’s Crystal Palace in 1871, labelled simply as “longhair feline”, and in 1889 the first standard was created.

A medium to large sized feline, weighing 7 to 15 lbs. They have rather short yet stout body held low above the ground. Longer hair makes them look massive, and gives a royal touch to their look.

These nobles always maintain phlegmatic calm, yet are friendly and obedient. Never being aggressive, these felines act with dignity, tenderness and loyalty to the owner. Never getting down to being picky, they live nicely in a normal flat, making friends with other cats, dogs and kids, yet behaving rather cold with strangers.

Their voice is rather quiet and they don’t oftenly show it. Persians reach maturity by 1 year and are fully developed by 2. This breed has general problems with procreation with litters being small and scarce, and are prone to having hardships with birth.

Their hair is as long as it is demanding for maintenance. Hair mats a lot and needs to be brushed on a daily basis, metal comb with rounded tips is the preferred instrument, and one go with a comb and another with a natural brush is a preferred method. Do keep an eye on their coat condition, especially under the eyes, mouth and orifices.
A designated shampoo and conditioner are also recommended. As well as brushing the hair during fan drying process, which in turn should be done alongside the hair growth instead of usual sheer method.

Persians moult in spring and summer, and without the help of a designated balm it would be tricky for them to digest all that clotting hair.