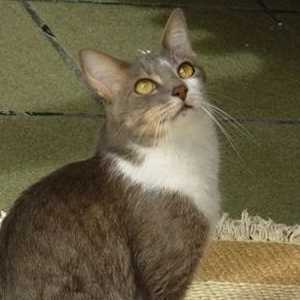 Brazilian Shorthair is a natural breed, therefore it has originated without any human interference. In 1980-s Brazilian Cat Federation (FBG) has decided to give some attention to local cats, which were never before considered a breed by anyone. However, it has turned out that they have a number of features, distinctive enough to think about a national Brazilian breed. The work on breeding project and standards has begun five years after.

Paulo Rushi took up the development of the breed, and WCF was the first system the breed standard, which has lead the breed into merging with the one of European Shorthair. The united breed was named Celtic Shorthair, and was given a preliminary recognition in FIF. Just a five years after, however, WCF has separated Brazilian Shorthair into a standalone breed.

A medium-sized well-built and rather lean feline, weight ranging from 7 to 11 lbs.

Head: Medium-small in size, longer than broad, forms a moderate wedge. Males have larger size head than females. Profile is slightly curved. Nose is not long, without stop, broad, goes up to the nose with a gentle curved line. Chin if firm, jaws are well developed.

Ears: Large. Set high. Have ear tuffs. Ears are higher than the width at the base.

Neck: Rather long, firm, but not too strongly musculed.

Torso: Of a medium size, muscular, yet, slender and elegant. Higher on legs is a cat - longer is the body of the cat.

Legs: Of medium length, slender, not too muscular.

Paws: Rounded, of a medium size.

Tail: Of medium length, not too long; broad at the base and slightly tapering to the end.

Coat: Short, shiny, lying close to the body. Silky texture. Has no undercoat.

Colors: All colors and patterns, except pointed colors, are recognized. Any amount of white is permitted.

Penalize: Short legs, udercoat, any other deviation from the standard.

Disqualification on shows: Short and massive head; plushy coat, too large or too small size.

Brazilian shorthair's friendliness, cheerfulness and loyalty make it for a real companion-cat, which may even be nervous when given not enough attention, although when given all the care they need their behavior is short from perfect: they are tender, obedient and delicate. They seem to be quite intellectual and fast learning, behaving well during open air strolls and vehicle transportation. Mouse control is a yet another business they excel in. Their personality is built throughout their life, meaning you may change it should the need arise.

Brazilian short hair needs little care, although petting and grooming are essential for them to feel your care. Being a natural breed, they benefit from inherit good health, and a lifespan of 15-20 years.

Balanced rations are recommended, though they may gain some extra weight due to soft lifestyle.