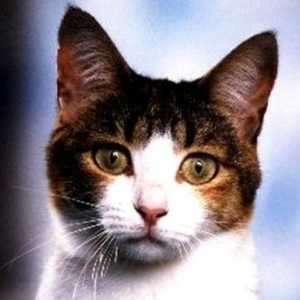 A natural turkish breed. Not unlike turkish Vans, Anatolians have emerged spontaneously in the Van lake's locale. For ages there was a misconception stating that these felines were brought from Egypt, while actually they have inhabited Eastern Anatolia since the times immemorial, and were also spotted in warmer surrounding territories, including modern Iran, Iraq, Caucasus, and even Armenia and south of Russia, where they would be domesticated and become wild once again. It is thought that modern Anatolians have inherited the “wild-type” genes. These cats were first shown to the public on a cat show in 1995, Germany, and were bred ever after under WCF's patronage. Other organisations don't admit them as a breed, claiming that they are actually shorthair Vans. The breed is widely spread in it's natural habitat in Turkey, and is oftenly seen in Germany, Holland and Greece. In Russia, however, it is still not so popular.

A medium-big sized cat, with an average body, fine muscles and a hard frame. Adult feline weights as much as 9-15 lbs. Gender dimorphism is affecting the breed.

Head: The head has the shape of a blunt triangle of medium length with almost straight profile. Muzzle is not large with clear outline. The nose is of medium length. The chin is firm.

Eyes: The eyes are large, oval and set at a slight slant. Eye colour shall be even and correspond with the coat colour. Odd eyed cat are often to meet.

Ears: The ears are large, with a broad base and slightly rounded tips. They are straight set, rather high and upright on the skull.

Neck: Massive and strong, as well as the chest.

Tail: Of medium length, very flexible, well furnished, but the length of hair on the tail is no longer than 5 cm.

Coat: The coat is short and without woolly undercoat. It has a fine and silky look, but is harsher and crispy to touch. it is water-repellent, that is why Anatolii dry very fast, even in the cold weather season.

Colors: The colours chocolate and cinnamon, as well as their dilution (lilac and fawn) are not recognized in any combinations (bicolour, tricolour, tabby). The pointed pattern is also not recognized. All other colours and patterns are recognized. Any amount of white is permitted. The description of colours is listed in the general list of colours.

Anatolian is an active, playful and curious cat. They don't really meow, but make separate vowel sounds like bird's singing, they are oftenly called “tweeting cats” for that. It is said, that anatolian cat is able to call you like “ma-ma” and nod at something that bothers it. They are fine with water and may even play with it, just as they do with simple paper balls. Their facial expression range is wide and deep: eye squinting, brows knitting, everything is possible.
Answering to master's complex demands or wagging it's tail to the beat, these cat's intellect is ever sufficient.

One should note, that in a heat of playing, these felines are able to jump as high as 6-7 feets.

Maintaining this cat's coat is a simple task, one should just regularly brush it with massage comb and give it a bath when needed. These felines are really healthy and their average lifespan is 15-20 years long.

These cats are fine when fed with good cat food, but if you want their rations to be all-natural - go for chicken, beef, boiled fish, chicken liver and eggs, dairy products. These cat's eat quite a bit for their size, but are not naturally prone to overeating.

Breeds derived or relative to Anatolians

Unofficial and slang names in russian