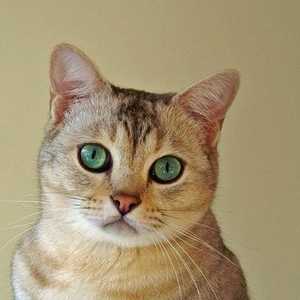 As you could have guess, the name is a junction of Burmese and Chinchilla names. These breeds were crossed in Britain in 1981, to produce a silver-coated cats. The first generation of dark silver kittens became the stripes of the breed, which is best described by latin «inmediumstatvirtus» - the golden . Then they were crossed with burmese cats, and even later in England and Europe - with persian chinchilla. As a result, the breed has got a plenty of new coats and colours.

In 1984 the Burmilla fancier club in England was found, the year after their first appearance on cat shows and British Cat Association acclaim. The official recognition by CNFF was granted in 1989, with the one by FIFe following in 1994. This was the first breed to have character features included in judging standard. According to WCF this cat is

Burmese ancestry grants this breed a great build, and persian chinchillas gave them their dim coloration. These felines are not large and weight 9 - 15 pounds. Their build is sometimes referred to as eastern-heavy type, and is quite elegant. Their frame is stiff with well developed muscles.

Head: Medium in size, round, well developed, silhouette is made up with soft lines. The whole skull tapers to a short, wedgy muzzle.

Nose: Defined by an abrupt "stop", nose tip and protruding chin tips should reside in the same vertical plane. Nose is not flesh coloured, but is red with dark outline. A darker "M" on nose ridge separates the eyes, an artifact of tiger pattern.

Eyes: Large, wide set, and a little slanted, defined by their oblique setting and a thin darker rim. Each eyes’ lower corner points at the nose at a blunt angle. All shades of green are accepted, most luminous and expressive are preferred. Amber eyes are permitted for red, cream and tortie coats.

Ears: The ears are average to large sized, wide at base and round at the tip. Set wide apart, they are bent slightly forward and are covered in short hair, even thinner on the inside.

Body: Medium size, rather compact. Chest is wide and round in profile, rump and back are the same width. Rump is higher than shoulders. Bone structure is extremely solid, and muscles are strong and defined.

Legs: Medium length, with strong bones. Hind legs are slightly longer than front legs, both are slender yet have well developed muscles. Slight agouti effect may be present.

Tail: Straight, medium to long, begins with rather broad base and tapers to a rounded tip.

Coat: Short (albeit slightly longer than burmese), thin, shiny and silky to the touch. Undercoat is bright and rather undeveloped, yet enough to give a slight lift to the hair.

Colours: All coats are shaded, yet there are different hues ranging from black, chocolate and red to blue, lilac, cream, caramel and apricot. Undercoat is usually silver or gold, hair tips are normally brown (sable), blue, chocolate, lilac, red or cream, developed tipping is expected.

Burmillas are described as calm, yet active. This may be the result of inheritance from both lively burmese and flegmatic persians. Calm, jolly, social and loyal, this cat has a medium to high need for attention, as such you won’t want to leave her alone for any extensive period of time when at home. Being very tender and easygoing this cat would gratefully rest at your hands and is nowhere near aggressive. Burmillas live well having other cats or dogs around, and are also fine in flats, open air strolls however won’t hurt at all. Not unlike burmese, burmilla are fine with water. Their only flaw may be their strong talkativeness.

Burmillas coat requires no daily grooming, although you may maintain their coat condition with a wet brush.

Breeds relative to or derived from Burmese: