This breed’s name misleads you with some geographical connotations, although the real origin is the good old USA. However, nothing is without a reason concerning these cats, and the name does actually remind of their ancestry, but this is just a theory and there is a yet another one: the name pays homage to Balinese dancers with their feline grace. This way or another, they were initially called longhair siamese, and once again, there was an obvious reason for a name like that.

Starting with 20-s 30-s american breeders’ view is crossed with . The first of this kind has appeared in 1928, and nobody knew where does that coat come from, presuming there is a recurring mutation most pets struggle with. At the time, semi-standard kittens were considered to be flawed. Things have started to change after the WWII though, when Helen Smith and Marion Dorsey from Merrymews and Rai-Mar catteries took up breeding more of these Balinese kittens. Later Silvia Holland from Hollands Farm Cattery, an avid Balinese breeder herself, has decided to unite enthusiasts under The Balinese Breeders and Fans of America (B. B. F. A.) flag.

First Balinese have appeared at cat shows in 1963 labelled as Siamese Longhair, although breeders of the latter wanted to hear none of it, and due to their protests the breed was renamed as Balinese five years after. The first standard was ready just two years after the breed was registered in 1967. Balinese were recognized by CFA and TICA in 1970, with FIFe followed in 1972 and has updated its rosters to include new breed in 1984.

Despite being somewhat popular in the US from the start, its european debut has only happened in 70-s. Post-soviet countries had to wait even more until 1988, when these beauties were eventually brought from Czech.

Despite appearing virtually everywhere now, Balinese are notoriously difficult to breed and thus are scarce.

An average-sized feline weighing around 5-10 lbs. Both fit and elegant, they are flexible and graceful. Generally, this is your normal Siamese with longer hair.

Head: The head is shaped as a long and narrow wedge. Lack of sharp turns from forehead to muzzle and barely present cheeks give it an aristocratic, refined look. Nose is narrow and long, chin is compact yet strong, on lighter coats the forehead is adorned with well visible stripes. Overall head profile is very smooth, with a gentle transition into a long neck.

Ears: Large, pointy and wide at base. The ears are very slightly hairy with rarely present, yet desired, small tufts at the tips. Overall ear profile is made to continue that of skull wedge. 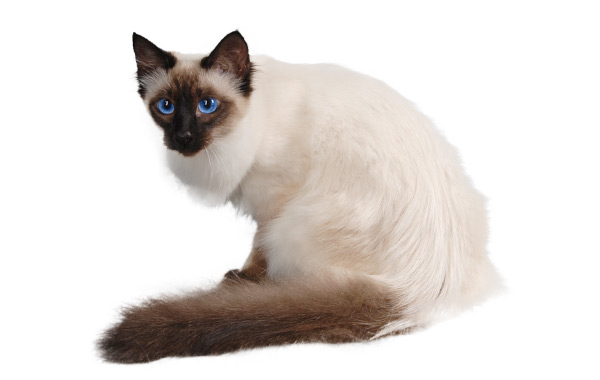 Legs: Thin and long, proportional to the body yet adequately fit.

Coat: Semilong, thin, silky to the touch. Hair length varies heavily in different spots, with it being rather long on the belly and flanks, and very much so on the tail. Having no undercoat, they are anecdotally claimed to be less allergenic than other breeds.

Colours: The balinese are defined by their colour-point pattern, which according to WCF is recognised in all colours without white. Ears, “mask” on the head and low part of legs and tail would have a vivid colour, with the rest being as close to white as possible, adding to the contrast between the points and background. Note that all points should be coloured uniformly and in the same colour, white inclusions and even separate white hairs are forbidden. The background must not be white, as in it should be very diluted yet same colour as points, and not colourless. Signature “mask” should cover the face reliably, but not become a “hood” by invading the cranium or back, it may also touch the ears, but never merge with them. Senior Balinese may darken with age, and this is considered normal. 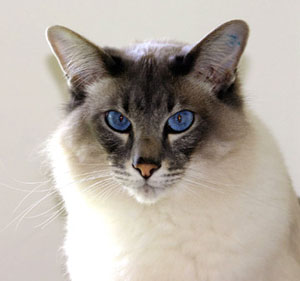 Being rather intelligent, they possess a unique character. Both active and sociable, they live nicely with kids and other pets around. Despite having rather quiet and tender voice these felines talk a lot with everyone and everything around, including themselves. Compared to your common Siamese these look more level-tempered, yet their playfulness is short from overwhelming, never sparing themselves from dashing and jumping around they would always crave for more. Coupled with their wits, their energy may be a lot of fun for the whole family especially if you’ve got another energetic playmate for your Balinese. Sometimes, however, they may cause trouble if left unattended: opening a pet basket from the inside just out of boredom is normal for them. Quickly picking a true owner among the family, longhair Siamese settle for nothing less but true love for them.

In terms of maintenance and care these cats keep it simple, all they need is a brush down the grain every now and then. Their coat, while long, is rather silky and clinging, and is also devoid of undercoat so proves to me less trouble than you would think, even during the molt.

Fine nutrition and a lot of motion - all they need to stay on top. To let them fully expend their energy resources, however, it is best to have a yard or take them out for a walk.