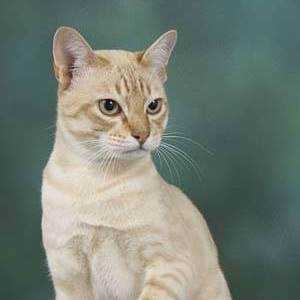 Origin of the breed.

The origin of the breed is, as you could probably guess from the name, - a mysterious faraway continent packed with beasts not to be seen anywhere else on Earth. The breed, keeping on par with the surroundings, is not very ordinary, what echoes in their second name - Mist. These felines were bred bred artificially to produce an animal of rare beauty, looking like a burmese cat with a spotted[1] pattern. Truda Straede, a breeder from Sydney, has undertook this task, and used burmese, abyssinian and siamese strains as well as some household tabby cats in the process. From their first ascendant, the breed has received their unique character, build and four out of six possible paints. Peace of mind, ticking and two other paints are a gift from Abyssinian, while gorgeous veiled(?) eyes were taken from siamese. Their last parent seemed to present them with early puberty and that tabby paint. The directed breeding programme was set out in 1975, with first kittens came to life in 1980.

The breed was given it's first official token of recognition in 1986, predictably by australian felinological organisations, the first worldwide system to express awareness of the new strain was WCF. It is interesting that prior to 1998 the breed was referred to as “Spotted Mist”, and was given it's contemporary name soon after. Currently, these cats are very rare, prevalent mostly in and by some degree in . Chances to meet one of these in a post-soviet country are extremely few.

Average sized felines with a vague oriental hint. They have a soft, (?) resilient fur with undercoat. The breed's differentia is it's spotted or marble paint with ticked background. The basic paint can be blue, brown, chocolate, gold, caramel, lilac or peach. Lower parts are generally lighter tinted, looking like a misty curtain, presenting felines with a unique charm.

Head: The head has the shape of a broad, blunt wedge, with good width between the ears. The contours are slightly rounded. In profile the nose shows a slight indentation, no break,
the nose and the forehead are equally long, the forehead is arched. The nose is already broad at the nose leather. The whisker pads are solid, with a firm chin.

Eyes: The eyes are large, lustrous, set wide apart and slanted towards the nose. The upper eye line is straight, the lower rounded. All shades of green are permitted.

Ears: The ears are of medium to large size, broad at the base with rounded tips. They are slightly tilted forwards. The outer line of the ears continues the contours of the head.

Body: Of medium size and medium length. It is hard and muscular and heavier than it appears. The chest is broad and rounded, when viewed in profile.

Legs: Of medium length and muscular, have characteristic dark stripes on the legs.

Tail: Thick tail in proportion to body, with minimal taper.

Coat: The coat is short, glossy and elastic, with undercoat.

Color: Rich and warm with rufous toning on nose, cheeks and ears present in even the palest colours. Paler on the underside, making an impression of “mist” on the body. As it takes a long time for the colour to develop fully in Chocolate, Lilac, Caramel, Gold (Cinnamon) and Peach (Fawn) kittens they will be much paler than adults until full colour is achieved at 2 years of age. Colours while derived from Burmese and Abyssinian colours have a different expression due to the genetic makeup of the breed leading to rufous undercoat and Misted Veil.
Spotted or Marbled. The Spotted pattern is random, with spots of any size and shape, including arrowheads and rosettes. The coat patterns have three levels of definition; ground colour, paler than pattern; pattern, delicate though distinct from ground colour. Appears to wear a misted veil, caused by random ticking.

Disqualification on shows: Any other eye colour than green in adult cats, lack of ticking.

Australian Mists are malleable, pleasant pets, holding themselves kind and tolerant with strangers, children and animals alike. Any entity can be a playmate for these lighthearted yet independent darlings. Being such a homebirds they live easily without outdoor ventures and able to spend longer times inside.

Australian mist is one immaculate cat. They are willing and able to keep their coat at it's best, so you should only brush them from time to time for mutual pleasure and setting a closer relationship. Washing is something you would like to avoid when not in extreme circumstances.

Cat's digestive system is rather sensitive to stale food, so you would like to monitor it's nutrition carefully. Moreover, males are slightly prone to stoutness, so it is strongly unadvised to sate them

Unofficial or slang names in russian: