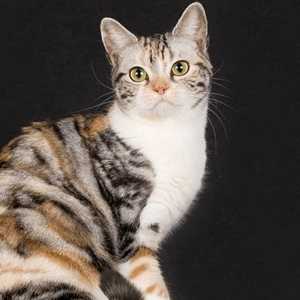 The origin of the breed.

These unusual felines originate from Verona cattery, New York. It is said that the first specimens were born due to spontaneous mutation in some unusual coated American

Shorthair's litter. The first specimen of the breed was a kitty named Adam (Rock Farm Adams of Hi-Fi) born on March, 5 1966, although he was not the only one, his siblings were killed by a weasel. It was very likely for Adam to share their fate, if only he was not sold to Joan O'Shea. A unique red and white kitten was not only saved, but a special breeding program was developed on his basis. Joan used American Shorthair cats in the breeding program.

Breed's standard was created in 1976 by CFA, and was later, in 1978, accepted by this organization. Their popularity was quite high only in USA and Canada; this breed is rather rare outside of these countries, with just a few hundreds more scattered around the world. It is not yet recognized in some countries, thou the majority of worldwide felinology organizations, except FIFe and GCCF, accept the breed. It is clear that the breed's somewhat low acceptance is due to the fact that not all kittens have that peculiar coat, making their breeding seemingly non-profitable. Some may be scared by troubles related to maintaining their diminishing coat, however, they are hugely mistaken.

American Wirehair are medium-sized cats (3,5-7 kilos). Kittens are born with wavy coat and become more wired in a few months. This makes them look a bit like a plush toy. Note that not all cats are born wirehaired, with almost every second cat having usual coat.

Head: medium size, broad, rounded. Rounded skulls, cheeks are full and well developed in studs. Profile with a modified stop goes to the muzzle – which is rather short and angular, broad, and has a squarish appearance. Nose is medium-short. Chin is «square», full and firm; jaws are very strong.

Eyes:rounded, medium to large, wide set, at a slight angle. Eye color correspond the coat color. Clarity of the eye color is desirable.

Ears: Medium size, not too large at a base, wide-set, covered with very short hairs; tips are rounded.

Neck: In proportion to the body, medium-short, neither too short and thick no too long and thin, muscular and strong.

Torso: Medium-large, rectangular in shape (length is bigger than height), rather than slender, but well rounded and proportionate. Broad chest, especially in males. Shoulders are well developed. Boning is medium, but musculature is well-knit and firm.

Legs: Muscular, medium in proportion to the body, straight; rather strong.

Tail: Medium length, thicker at base, tapering from well-rounded rump to a rounded tip. Taper is slight, neither blunt nor pointed, carried almost level with back, in proportion to body.

Coat: Rather short, very dense and coarse, shaggy and curly, but only in appearance. At the touch it is springy, soft and very pleasant. It is a breed-forming sigh. Such an amazing texture is formed because each guard hair of these cats has either a little “hook" at the tip, or is roughly crooked.
Undercoat is thin. Whiskers can also be “curly".

Color: More than 60 different variants of color, with the most popular being black silver tabby (blotched, mackerel and spotted). Chocolate and lilac colors are not permitted. 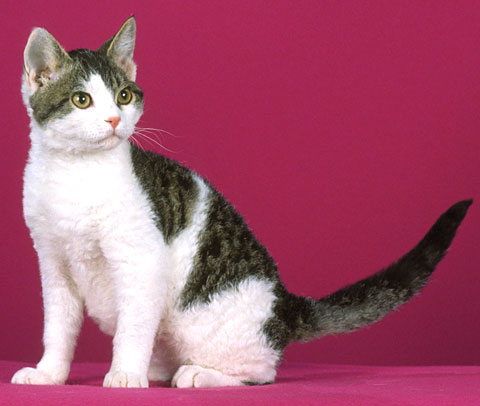 Felines are pretty energetic, playful, healthy and rather fit. They are talkative, kind, loyal and tend to love their master tenderly, while saving some distance with the strangers at the beginning. American Wirehair adapt well to children and other pets, and coexist peacefully with them. While being non-aggressive, timid and pettable, they would really enjoy resting on your knees and hands. Not requiring much space, they will feel splendidly even in a small flat. If needed - you may even rely on their sharp hunting skills.

Appeared due to a spontaneous mutation, they are remarkably healthy, with most common diseases being allergy and dermatitis. Their average lifespan is 15 years. Having hard “wires" for coat, they need little maintenance and should only be washed on a monthly basis. You definitely would like to avoid grooming and fan-drying, for these procedures may cause irreversible coat damage.

Having an appetite to match, they should be given balanced and selected rations. 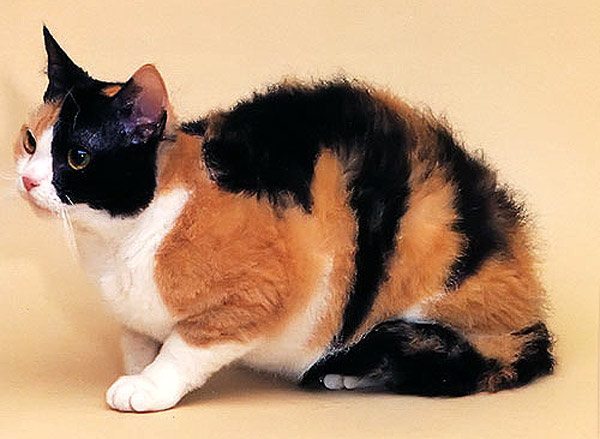 Breeds, derived from American Wirehair: none.