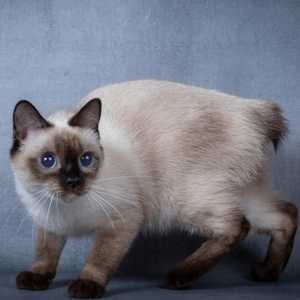 Toy Bob, a breed of smaller shorthair cats with bobbed tail developed in Russia. It all began in mid-80’s, when ms. Krasnichenko picked up a male, and later female, a shorttail of small stature and siamese colors. By 1988 this cat brought a similar yet even smaller kitten, aptly named Kutsyy (rus. Куцый: small, short), who became the paragon of the breed.

A comprehensive breeding programme and a large selection of smaller cats has quickly cemented the breed’s defining features and made them reliably transfer between generations. The breed’s name, however, took longer to decide on and would change multiple times in the following 30 years.

Originally Scyth-Thai-Dons (Scyth as in scythian stands for the name of ms. Krasnichenko’s club, Thai for the physical likeness, and Don for the local river), these small cats would be given another big name of Scyth-Toy-Bob, and was recognised by local organisations in 2015 under such name. Acknowledgement by WCF would follow in 2016, and an appropriately short name of Toy-Bob will become the new standard. 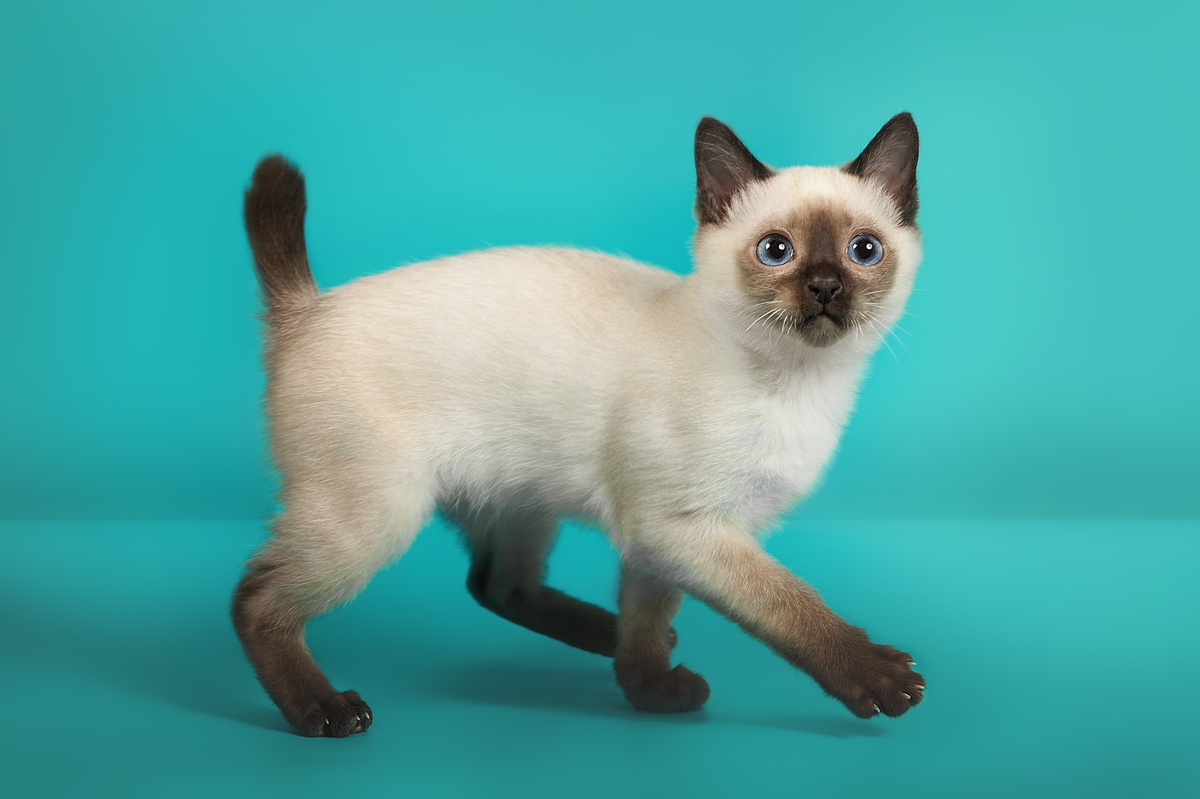 Toy-Bobs are rather small (noticeably below average), yet stout cats with desired weight of around 4,5 lbs. Cats with a weight of less than 2 lbs are infertile, and kittens are normally born weighing 1-3 oz, which is half the weight of other breeds’ newborns, and are fully developed by 18 months. The only allowed pattern is seal point, any other coloration hints at disallowed crossings.

One could speak about Toy-Bob character for hours on end. Pick up a toybob and they will rest on your hands indefinitely until you get bored, for they never will. These cats are unnaturally tender and naive, which also adds to their friendliness, as they treat any other creature as a friend., be it an adult, child, dog, cat, rodent, guinea pig or a bird.

Despite their small size, Toybobs know no fear. They are very docile and can be taught simple commands like sit or fetch. Small kittens can make doglike sounds, and adults prefer to keep silent. Curious from nature, toybobs always meet people and strangers, and will take time to inspect their hand luggage, if any. Toybobs are, quite literally, made for love, and the owner should consider spending as much time with their small cat as possible. 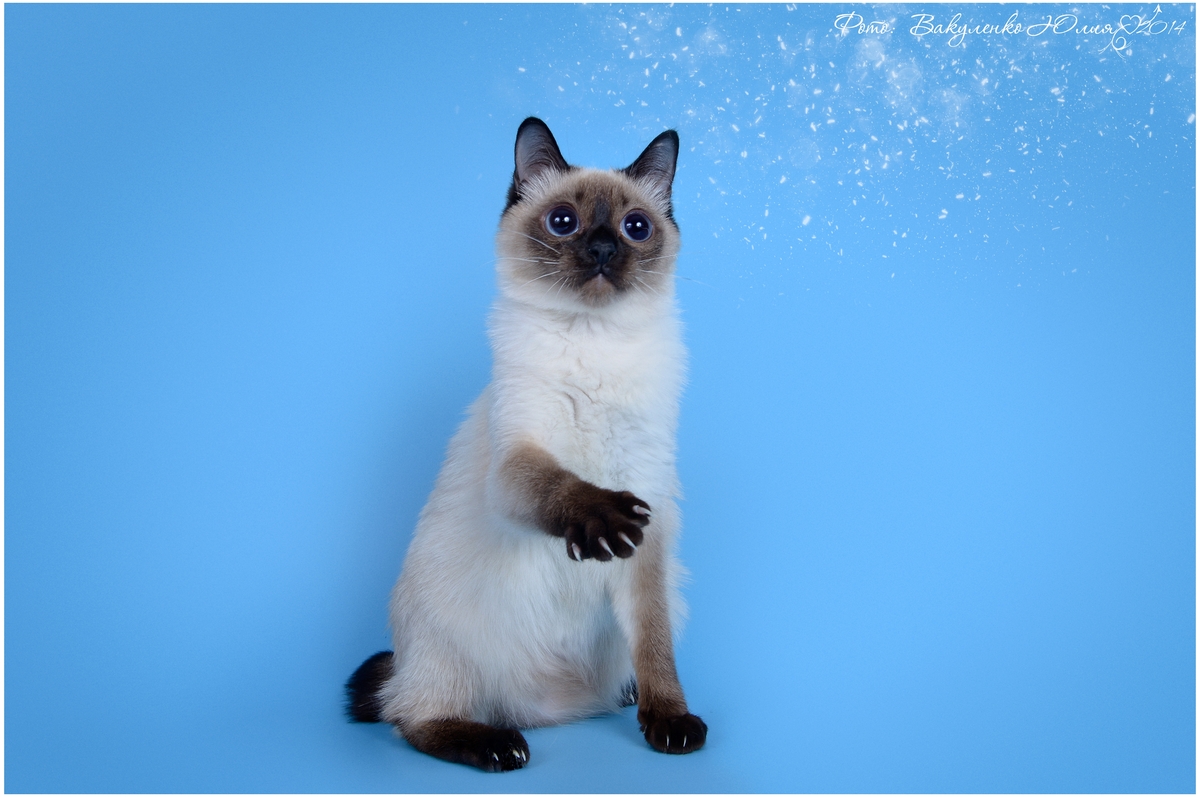 An interesting, and without doubt useful trait that many new and existing owners will like is Toybob males’ tendency to not mark their territory

Nutrition, same as with most cat breeds, should be wholesome, varied, and made with quality ingredients. High grade, or better yet premium grade dry feeds are also acceptable, if it is hard to provide fresh rations. Other than what is normal, Toy Bobs do not require any special maintenance.

Type: Below average in size, short and stout, with wide chest and short neck. Able and developed muscular structure, straight spine, strong limbs and short tail. Matures by the age of 1,5. Only seal point colour is available. Desired weight of adults is around 4,5 lbs, males may be somewhat larger.

Body: Rectangular shapes, below average size, thick and muscular while remaining short and neat. Straight spine extends from a broad chest. This breed in not particularly affected by sexual dimorphism.

Head: Short modified wedge with slightly rounded silhouette. Forehead is ull and roundish, has no flat surfaces. The profile is made with well developed forehead-nose transition at around eyes’ height. A prominent stop is unacceptable. Ears: High set, slanting forward, spaced one ear width apart. Toybob's ears are medium in size, and taper to a round tip.

Eyes: Vivid baby blue coloured, they are wide open, round and large in shape, and are in large part a reason why Toybobs are known to be so expressive.

Tail: Very articulate, should have a number of breaks or kinks, yet straight tails are still accepted if undesireable. Visible tail length be at least 1 inch, and a third of

Coat: Short, thick and springy because of developed undercoat. Guard hair is as long as the undercoat, hair does not cling to the body too much,

Colours: Seal-point, even colours and contrast are more valued than brightness. 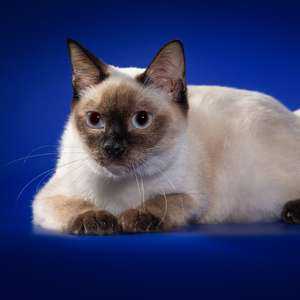