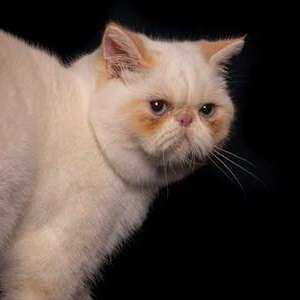 When the exotic shorthair feline has been officially acclaimed, the question arose of what to do with longhair kittens sometimes appearing in exotic litters, for there was no standard for anything like that. The CFA used to treat them as a sub-product of Exotic Shorthair and branded them as “Longhair Exotic”, leaving them with a right to be showcased at a cat show, without an ability to actually win anything. Numerous other European (except for GCCF) and USA-based organisations do treat them as Persians.

Weighing from 8 to 13 lbs, Exotic Shorthair is not remarkable in either build or size, yet while looking like a generic Persian, they have an entirely different character.

Head: Massive, round, with a very wide skull and smooth forehead. The muzzle is short, wide, also round, surrounded by thick cheeks, giving the whole face a very specific look. Chin is wide and strong, nose is rather short, wide and is decorated by a very abrupt "stop". According to FIFE standards, nostrils should be sufficiently wide and allow for enough airflow.

Eyes: Eyes: Medium to large in size, wide set, round, open and protruding. Eye colour should harmonize with that of coat, and is usually in gold-copper gamut, green for gold and chinchilla coats, blue for white and colourpoint.

Ears: Small, wide and somewhat closed, tapering to a rounded tip. Set far apart and slanted forward, with long and thick hair on the inside.

Body: Large to medium in size, stoutly built, with thick and powerful bone structure and surprisingly developed muscles. Chest and shoulders can be quite wide.

Paws: Large, massive, strong and round. Hair tufts between fingers are demanded by the standard.

Coat: Short, yet quite long for a shorthair, it is thick and fluffy, not too clinging to the body.

Colours: Anything goes, both colour and pattern. All persian colour options are recognised.

Disqualification on shows: Traces of spotting on solid colour coats.

Exotic shorthair is a soft, open-minded and active feline. The persian ancestry has given them some flegmatic charm, although they are much more powerfully built and will vent that energy by recklessly playing and prancing every now and then, and for much longer than most other breeds, when they do. Being rather curious and tender, they behave like plush toys never resisting your cuddling and huggling, actually they are never agressive and thus are quite dependent on not being alone.

Exotic Longhair is a great pet for those seeking for a loyal companion that is not intrusive and loud.

Exotic Longhair’s coat should be brushed with a special regularly to prevent clotting, just as nose and ears should be cleaned every so often. Longhair Exotic’s average lifespan is 15 years, although it can be more if you ward off the dental, respiratory, ocular, renal and cardiac diseases.

Breeds derived from or relative to Exotic Shorthair?