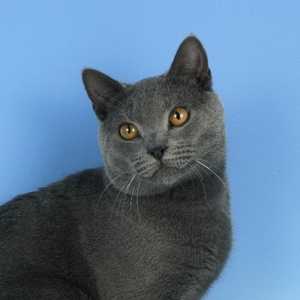 Chartreux is the French cat darling, considered by many to be national achievement. Sidonie-Gabrielle Colette has a novel “La Chatte” written as a tribute to it. Charles de Gaulle was reportedly a big admirer of the breed. Enjoying the benefits of multiple centuries of history, this breed was referenced in literature as early as XVI, Joachim du Bellay put his feelings in a poem, a tribute to his passing cat, titled Vers Français sur la mort d'un petit chat (French verse on a small kitten's death). Characteristic of medieval times, less morally steadfast were known to sell Chartreux hides as precious otter fur, as these cats’ coat was renowned for its quality and was in high demand up until the XIX century.

The origin of the breed is cloudy at best, the persuasive among them claims that Chartreuse Mountains community of Carthusian order has laid their hands on South African imported blue cats some 5 centuries ago, and over time developed them into contemporary Chartreux, known previously as Chartreu and Carthusian. Overall, it would be reasonable to state that it is probably the Egyptian cat and Manul, inhabitants of harsh mountain ranges of Syria, Turkey and Iran, whose thick soft coat has inspired crusaders to bring these cats to Europe as trophies, and whose genes are responsible for the distinctive traits of modern Chartreux. Up until XVI the common name for these cats was French Blue, and in XVIII Buffon in his “Histoire naturelle générale et particulière” refers to it as Domestic Blue, while Carl Linnaeus of Sweden calls it French Cat in his Systema Naturae, while it took some time for their contemporary name to became widespread, these cats were listed as early as in 1723, in Dictionnaire Universel de Commerce by Bruslon, and appeared at dedicated cat fairs in XIX century. Not all was, however, ideal in Chartreux history and development, as the World War broke out and but all felinology was halted, stopping all development attempts causing a near-complete extinction of contemporary Chartreux. It was not until 1926 when a colony of unique felines was reported by Leger sisters to roam the Bell Isle Hospital grounds. For some time the Isle was the only breeding colony for the breed, largely maintained by Leger sisterms themselves, responsible for selection, nutrition, and crossing Chartreux with other breeds to maintain a healthy gene pool. According to records, developing cats were crossed with early contemporary Blue British Shorthairs and Early Blue Persians, courtesy of Paris Cat Club.

Despite all hardships in its development, modern Chartreaux are quite similar to the original types found in Jean Simonet’s “Le Chat des Chartreux”, and it shows how strong the original type is, and how responible and dedicated were its breeders.

A rather massive, stoutly built feline, weighing 7 to 16 lbs on average. The breed is affected by severe sexual dimorphism, with males being much larger and stronger than females. Aside from signature coat colour and texture, the breed is defined by its “smiling” face.

Голова: Wide, roundish, not quite spherical but trapezoid in shape. The skull is not too convex, with flat areas between ears. Cheeks are full and round, quite prominent in adult males. Nose is wide and straight, ideally, forehead-nose transition. Starting at the age of 2 months, males start developing sharp, protruding cheekbones, resulting in their characteristic smiling grin.

Ears: Medium to small in size, high and straight set, broad at the base, tapering to a rounded tip.

Body: Medium to somewhat large in size, quite massive and powerful, especially in adult males. Thick, with developed bone-muscle structure. Chest is broad and shallow, spine is straight.

Legs: Straight, medium to short in length, adequately thick with their developed muscles and thinner bones.

Tail: Medium in length, broad at base, tapering to a rounded tip.

Coat: Short, very dense, smooth to the touch. Elevated from the skin slightly by thick and fluffy undercoat, has noticeable water-repellant quality.

Colours: Solid, blue colouration is a breed-defining feature. While darker and lighter colours are all allowed, lighter and bluer coats are more desireable. Kittens are born with tabby markings and gray-blue eyes, and by the age of 3 months eye colour matures into orange copper, while tabby markings disappear in the next 3 months.

Chartreux cats are known for their calm and level disposition, are normally silent and polite, easily adapting to any conditions and other pets. While they form a strong bond with the owner, they still behave when left to their own devices, and serve as micers on the homefront if needed.

The more time chartreux spend outdoors - the better, to an extent: these cats need a channel to release their energy and hone their hunting instincts, and the coat density should improve. Do note, however, that direct sunlight may result in coat “rusting” and discolouration. Weekly brushings are recommended.

Breeds relative to or derived from Chartreux: British shorthair.