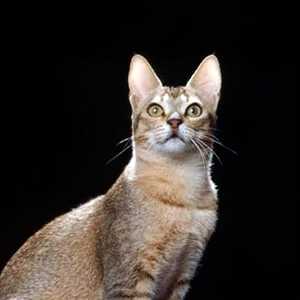 Ceylon - once a widely known name of Sri Lankan kingdom. Ever since the XIX century there were talks about small aguti-painted felines, and in 1984 Paolo Pellegatti has brought the finest six of them to Italy and showcased them at Erbe cat-show right away. He aimed to develop a pleasant and tender, gentle aguti feline. Ceylon was the only Italian-bred feline.

The circle of fanciers was big enough to form a club by the year 1988, and in 1929 the standard was solid and the breed was given a key status in 1989.

A small to medium sized feline with signature agouti paint, compact torso and a light, yet developed frame.

Head: Rounded in shape, average in size, short and broad skull. It features a flattened forehead, prominent cheek bones resulting in cute round cheeks, peculiar profile defined by it’s slight “stop” between the forehead and the nose, the latter being described as rather short.

Ears: Large to medium, set high and wide, round at the tips and broad at the bottom. Lynx tufts are desired.

Paws: Neat and round.

Tail: Normally solid and short, wide at base, tapering to a rounded tip.

Coat:Short and delicate, silky to the touch, has no developed undercoat.

Colours: Ticking tabby, different ticking produces a plethora of colour options from sandy to golden. Accepted colours include “Manilan” (black ticking on gray), yellow or apricot on brown, blue, cinnamon, fawn, red, cream and tortie. Chest, spine and flanks should be marked by ticking – darker tone agouti stripe. Characteristic “M”, the Holy Cobra symbol is also necessary on the forehead, as well as some 2-3 stripes on the cheeks, so are leg spots and tail rings.

Ceylon feline is incredibly mobile, yet is also tender and tame. It’s character is sociable and somewhat naive. These cats live well in a city flat and have no usual troubles caused by moving to a new place, generally, they are very stress-resistant.

Ceylon felines are incredibly easy to look after for they need no regular brushing or washing, all they need is a cozy and warm bit of personal space.

Breeds relative to or derived from Ceylon