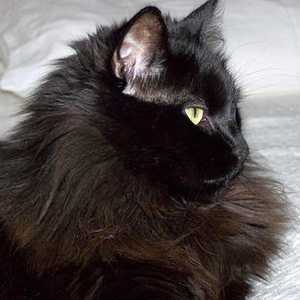 A relatively young breed, said to be developed in 80-s and was officially recognised in 90-s. The english breeders, while crossing persian Chinchilla and Burma, gave birth to a new breed group, that has later unified into Asian breed. The breed included misty, tabby and full-coloured asians, as well as Burmilla and Tiffany (aka Asian Semi-longhair). The breed’s splendid array of colours, cute look and easy temper attract new people. Apart from Russia, which is seemingly devoid of these cats, the breed is admired worldwide.

With average size the cat weight ranges from 3 to 8 kilos, sometimes even more. The frame and muscles are well developed. Feline’s forms are both sumptuous and proportional, with rounded breast, beautiful spine line and fit belly. Because of relatively strong gender dimorphism, females are slightly smaller than males.

Head: Has a gently cut trapezoidal shape. A short, yet roman nose adds to the accurate profile. Face is soft-cut, though the chin and cheek-bones are well-developed and the mandible is broad and slightly protruding.

Eyes: Eyes are wide set, very large and expressive, round or almond-shaped. Only clear yellow or amber colours are permitted, no speckles are accepted.

Body: Medium length and size, looks lighter than it is, muscles are well developed.

Legs: Proportional, adequately long and somewhat thin, though muscles are distinct and visible.

Coat: Rather short, thin and shiny, lies closely to the body and has almost no undercoat.

Colours: A lot of accepted variants, including black, cinnamon, lilac, cream, fawn, gray, silver and some others.

Peaceful, appeasable, tender and delicate cat. Lives well in a flat and requires no outdoor activity. Very affective and loves every member of the family, including children. Feline is smart, easygoing, playful, active and expressive. Although they are agreeing and peaceful, they can and will protect themself and their kin when needed. A short absence of a master is not a problem for the pet, yet a long solitude may prove distressful.

The cat is easy to care for - a rubber scrub glove is enough. You would not want to groom them more than once a week, and wash them more than once a month. Ears, however, should be checked and cleaned weekly, and eye emissions need to be removed with wadding or tissue on a daily basis. A scratcher is highly recommended.

Allowed crossings: All breeds, derived from or congeneric to Asian cats.

Breeds relative to or derived from Tiffany: