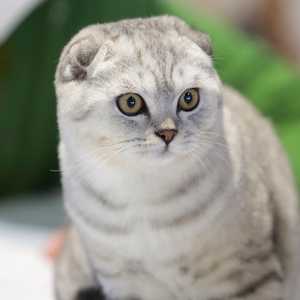 The origin of the breed. These felines are defined by it’s peculiar “folded” ears, that make them look a little amused at l time. Babyface - that is how fanciers call them. Actually, they were known to inhabit China for long, and their breed-defining feature is caused by a mutation. Their first notion is dated with felines are susceptible to it, this goes well with the fact that the forefather of modern fold cats was also white. The first Highland Fold is considered to be Susie, a McRae family’s k1796 in the “Worldwide Magazine of Knowledge and Pleasure”. 100 years after a british sailor has brought one of these to Europe. Thus we may say that homepets with folding ear gene have been around for like 200 years. Yet another notion of their existence is dated with the recovery of an other fold feline in 1938. It was first thought that only white longhair kitten. Fold-eared Snook, a Susie’s offspring was crossed with a british shorthair and gave birth to a Snowball - a snowy white and bally round chap. It is notable that fold ears were reliably inherited, thus enabling fanciers to take up breed development. William and Mary Ross were the first to do so when they’ve spotted that peculiar feline at their neighbor’s. In 1971 Mary has sent some kittens to Nelly Todd, a renown specialist from Massachusetts. It was an obligatory step, for backcrossing and interbreed selection may lead to serious problems including skeletal deformations. The problem was solved by conscious crossing with british and american shorthair, as well as some exotic cats. This breed’s popularity has skyrocketed immediately after the USA show off with CFA and TICA almost instantaneously accepting it. In Europe though it was not as bright, the “new” folds have appeared there in 1982 and some local organisations still won’t admit them. The thing is that Highland Fold is a result of American “overhaul”, a cross between scottish and persian felines that has both the long hair and the fold ears.

An average-sized feline weighing from 5 to 13 lbs. Being short and stumpy it is defined by round shapes and peculiar fold ears, as well as a nice longer coat.

Head: Round, with convex forehead and round cheeks. Adult cats may have some limited cheek sag. The muzzle is rounded and has a soft profile, whisker pads are round. The nose is wide and short, a slight “stop” in the profile is permitted. Strong chin should be present.

Eyes: Large, round, fairly wide set. The colour should match the coat coloration.

Ears: Medium sized, broad at base with pointy tips, auricles have some forward slant. Ears should be placed at least one ear height apart.

Body: Average in size, adequately long, described as evenly thick from shoulders to hips. Broad chest and shoulders, together with developed muscle structure, add to the powerful and chunky appearance.

Legs: Medium in length and girth, proportional to body length. While leg musculature is exceptional, the bone structure is only average.

Tail: Long, broad at base, tapering to a rounded tip, well feathered throughout it’s length.. Very articulate and flexible.

Colours: Any solid colouration is permitted, except for chocolate, lilac and siamese.

These cats are known for their peaceful and level temper, they are not leadership-hungry and thus are nice to other pets. Their playfulness and mobility fascinate children. Highland Fold are quite sociable and treat everyone nicely, their quite voice makes it for a shy behavior overall. Do not think of them as of a pushovers though, they are quite fit, vigorous and have exceptional hunting skills.

These cats may be brushed on a weekly basis usually, molt seasons call for daily procedures. Ear condition is also a something to monitor. Note that scottish fold crosses may result in anomalous litters, american and british shorthair cats are preferable. 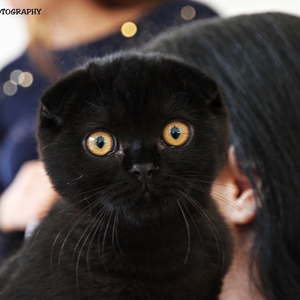 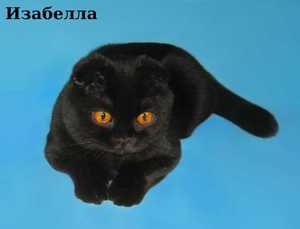