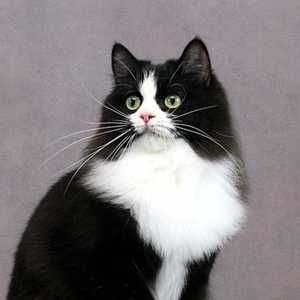 The breed is named after english “ragamuffin”, a beggar, vagabond. From it’s name you may guess they are a ragdoll hybrid, and you will be right. Ragamuffin is a cross between a ragdoll and a stray cat, that comes from 1990-s. The first showcase of the breed is dated 1994, they were shown by a gifted american felinologist Ann Baker. She was the one behind the breed’s first name - the Cherub, as well as the only fancier having a right to use it. Other breeders, bound by copyright, had to come up with an alternative name. The breed was given a competetive status by ACFA in 2000, and was given an official recognition by CFA in 2003.

A somewhat large breed, with adults weighing 10 - 22 lbs and looking like a ragdoll cat, yet with more diverse colouring.

Eyes: Large, oval, slightly slanted. Colour ranges from green and golden green for classic coats, to blue, azure, and also green for white and bicolor coats. Colorpoint cats should have their eyes in bright blue, and minks’ eyes should be aquamarine.

Legs: Medium in length and girth, muscular, with hindlegs being slightly longer than forelegs.

Coat: Can be either long or semilong, yet is always thick, smooth and silky to the touch. Topcoat and undercoat have almost equal length, both neck and hindquarters have a notable ruff around them, caused by elongated hair in the area.

Colours: Any colour variation is permitted, most widespread are colourpoint, bicolour and tabby.

Flaws: Thinner bone structure and skull in females, short collar or lack of hair on neck and ruff in non-neuters and kittens, shorter leg hair.

Ragamuffin is defined by it’s easygoing temper, it is a loveable, playful and a tender pet that loves resting in human hands with great acceptance. These cats are easily trained and are rather smart, adapting to any living conditions and company. One should keep in mind that Ragamuffin will never retaliate and would only flee and hide when in danger. This cat is completely deprived of any feline instincts and as such it can not be held as a mouser.

This breed is somewhat rugged and frugal in this term, it’s coat needs no special care yet should be brushed on a regular basis. Ears and eyes condition should also be monitored.

Balanced and sufficient rations are required, professional-grade foods are preferred. If you stick to home-made nutrition you may want to utilise vitamin supplements and a special solution to prevent hair clotting in bowel.

Breeds relative or derived from Ragamuffin: none