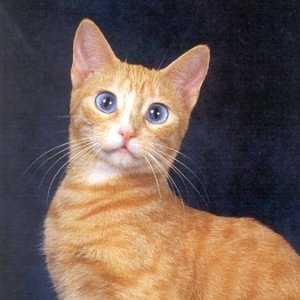 There are numerous instances of black cats with white tail tips in many a story and fairy tale, yet until 1984 nobody could think of it as of a real deal. Ojus Azules, or as it is referred to sometimes - sysirinchium, the blue-eyes. This breed was developed by american specialists less than 30 years before, and thus is rarely met today. To add more, the very mutation affecting the eye color was revealed not so long ago. Ojos Azules have a traced origin from a cat named Kongflau, a tortie cat with a splendid dark-blue eye hue, resembling the one of New-Mexico’s colourpoint cats. With Kongflau was started the age of the new breed, possessing an unlimited variety of coat colours yet always having a pair of blue eyes. This is why the breed was named after the Ojos Azules plant, which is Spanish for “Blue Eyes”.

The breed was given it’s TICA standard in 1991, although there still is only a few of it’s specimen and it is not widely known outside the USA. An interesting fact is that there are cats with the same colour scheme and, presumably, the same mutation in Altay, Russia.

An average-sized feline, both elegant and fit. It has a proportional body sitting on a usual frame, it is neither long nor is too massive. It’s breed defining feature is the blue eye-color coupling any of it’s coat colours yet adding white spots to each of them.

Head: Shaped much like an equilateral triangle, with a slightly convex forehead. Jaws are rather strong, muzzle is slightly elongated and well defined by angular whisker pads which make it look more square than it is. The chin is also strong, but not protruding. The profile has slight, yet visible indentations by the nose.

Eyes: Large but not bulging, almond shaped, very wide set and slightly slanted. Baby-blue or gray-blue colour, darker and more vivid shades are preferred. Odd eyes are allowed, pupil may have gold, copper or green tint in this case. Blue colour should never have green hues.

Body: Oriental type, medium length, not too massive with narrow chest, straight spine and rump higher than the crest.

Tail: Proportional to the body, tapering and pointy at the tip.

Coat: Short, silky, thin and soft, shiny and clinging to the body. Undercoat is not very developed, although density is required for multi-coloured coats.

Colours: Any colour and pattern variations are allowed, except for himalayan and their whitened variants. White colouration is generally undesired. White spots often occur in head and limbs area, although the less the better. White tail tip is necessary, blue eyed white Azules are not desired, for it is impossible to distinguish them from regular white cats.

Unlike most "orthodox" white cats, Azules are blessed with fine hearing. Their character may be described as level, tender, affectionate and aggression-free. They do also have relatively high IQ. These felines are active, mobile and playful, living easily with any other pet or family member. Feeling fine in a city flat, they don’t need outdoor walk and are adapted easily to new places.

Ojos Azules are incredibly easy to maintain. Their coat needs no special procedures, apart from a regular brushing time or two a week. During the molt season, however, you will have to brush it every day. One should also monitor their ears, eyes and teeth condition on a weekly basis at least. Otherwise, they have pretty good health and a longer than average lifespan of 20 years.

Breeds relative to or derived from Ojos Azules