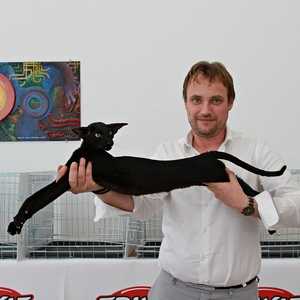 This relatively novel breed has appeared from mid-60’s felinologic experimentation arranged by american breeders. First oriental longhair kittens were produced by an Oriental Shorthair mother and Balinese father, gaining color from the prior and hair length from the latter. Nowadays the breed is still in active development, breeders strive to perfect the appearance and character of these cats, although these peculiar traits are what have originally charmed experts when Oriental Longhair have first appeared on a cat show.

The breed has received it’s official acclaim in 1977, and with it’s plethora of colours is recognised by FIFe and WCF of Europe. Still, the breed is not very widespread.

Strong, agile, flexible, lean and exquisite - this breed has it all, while weighing 10 to 13 lbs. Oriental Longhairs are leaner than your usual orientals, although they are not large and their bones are rather thin.

Head: Elongated and triangular in shape, with a flat forehead transitioning smoothly into a slim muzzle. Together with a long and straight nose and strong, developed chin these features shape Oriental Longhair’s signature, chiseled look.

Eyes: Almond shaped and set at a slant, with it’s natural angle highlighted by lower eyelid’s tension straightening it. While eyes themselves are not too large, they are wider set than usual. Colour is usually green, yet white coated cats may also have blue or odd eyes.

Ears: Large, broad at base and tapering to a round point, they should scale with head size (i.e. longer head will have larger ears). Vertical in profile, they must be set in a way where outer edge continues the wedge of the head.

Legs: Legs are long and slender too, sa if continuing the tradition set by their upper body. Hind legs are longer than front ones, and allow for impressive jumping prowess.

Tail: Well proportional to the body, which translates to whippy and long, reaching to shoulder blades and beyond.

Coat: Glossy, soft and somewhat long, yet appearing shorter than it really is because of its clinging property. While the undercoat is rather thin, the neck and legs are well coated.

Colours: Any colour is permitted, with lilac and chocolate being the most desireable.

Playfulness and wonderlust, as well as the desire to be involved in anything their owner does are definitive traits to their rather unique character. Like most orientals do, these cats pick their master among humans and give almost all of their love to them. In comparison to their shorthaired brethren, these are more level and calm.

Despite their beautiful coat these cats are a breeze to look after. Brush them 1-2 times a week and on a daily basis during molt. Keep an eye on their ear, mouth and eye condition to previse and prevent trouble.

Oriental shorthairs are valued for their unique, muscular yet elegant physique, and as such should not be subject to having abundant rations. Fresh ingredients and plenty of water, on the other hand, would be of help when paired with smaller and fewer (no more than two per day for adults) portions. Grown up males require 300 kcal/day, while females settle at 250kcal. Younger specimen should have more frequent nutritions since their smaller bowels make short work of what they fit inside. Some felinologists presume that dairy products are necessary for these felines to develop properly, although you should note that milk is essentially a food and not a drink for them, and as such there should not be too much of it. At least 2 hours should pass since last meal before diary snack is safe.

Breeds relative to or derived from Oriental Semi-Longhair 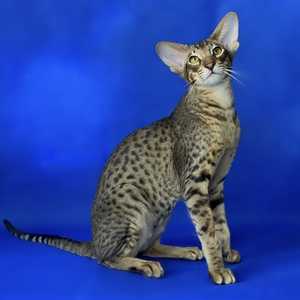 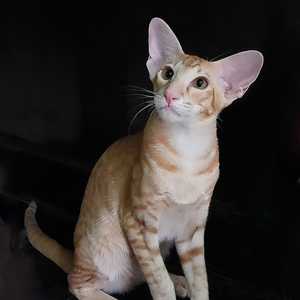