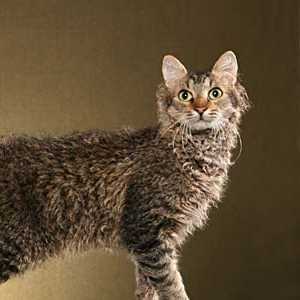 This particular breed originates from the USA, with a cute and curly Curly being it’s first specimen. Curly herself was born by a common pet-cat in 1982, Dallas, State of Oregon. Unlike her five siblings this one was born completely naked, yet to it’s owner’s joy, it would be encased in a silky curly coat. Later, this one would give birth to a number of curled kittens. The breed is named after their curly coat, that does look like it was permanently curled. It was officially recognised in 1996, the year when TICA has proposed a standard for the breed. 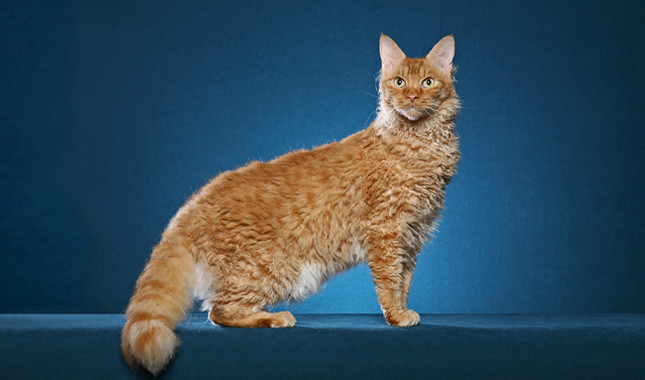 A medium to large sized feline, weighing 8 - 12 lbs which is surprisingly heavy for its size. To add more, this breed is strongly affected by sexual dimorphism, with males noticeably larger than females. Their overall build is quite thin, resembling eastern type.

Head: Averagely-sized and wedge-shaped, roundish skull gives it smooth outlines. Smoothness applies to forehead-muzzle line, but not to muzzle and chin, which have strong contours. Nose is medium in length, muzzle is somewhat wide, whisker pads are prominent.

Eyes: Medium to large, almond shaped, expressive. Not too wide set, slightly slanted, their colour is not related to coat colour.

Ears: Medium to large in size, broad at base with roun tips. Placed wide to continue head’s wedge theme. Ears are flared and furnished, earmuffs are present, lynx tufts are desired.

Body: Medium sized and elongated slightly, with well developed muscles and average boning. Rump can not be higher than the crest.

Paws: Neat and round.

Tail: Average length, thin and tapering, it is well plumed.

Coat: Distinguishing feature is hairs’ curly (preferable) or running quality. Very soft to the touch, it has dense undercoat and guard hairs, for adults a “collar” is desired. Curling may vary on different body parts, ranging from very light on ears to tight rings on flanks. Kittens may either have wavy, straight or missing hair on birth, and would usually lose any and grow a new, usually curly coat. This may happen multiple times during their first year of life.

Colours: Any pattern and colour combination is allowed.

Disqualification on shows: Thin and square body and/or short legs.

Laperm is an active and friendly feline, tenderful to everyone yet devoted to its owner only. Being a hunter of a refined skill, it feels great in suburban space, yet is also fine in a city flat, it does also live well with dogs. The killer-feature of the breed is it’s hypoallergenic coat, as well as it’s quiet and melodic voice.

Despite the peculiarity of it’s coat, it is easy to maintain by just petting it every once in a while, which is at least a time a week. While easy to handle, the coat is rather thin, and you should mind that a wrong type of brush may damage the hair. Being once an american shorthair, Laperm benefits from natural resilience and health, and has no inherent genetic flaws.

Allowed crossings: any breed, that is not affected by “overpopulation”