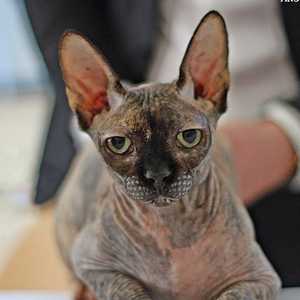 These cats spark different feelings among people with some adoring and some repulsing them. This way or another, Sphynx is an uncommon and a valuable feline. It’s development was commenced in 1966 Canada, when an ordinary housecat Elisabeth gave birth to a hairless kitten. Due to the fact it was caused by a random mutation, many still think sphinxes should have never existed. However, there were fanciers ready to take up the development of the hypoallergenic feline. The hairless cat was named Prune, the mutation was secured by backcrossing, and the development was commenced. This strain, however, was lost, and the development was discontinued until 1975. Yet again a hairless kitten was born where it was least expected, in Vaden, Minnesota, the cub was born in a home cats litter and was called Epidermis. A year later, a yet another hairless feline was born there. Both cats ended up in a single cattery and became the forefathers of the new elite strain. Canadian hairless felines were later used in the production in 1978. Numerous hairless felines were used in the development of the breed, mostly devon rexes.

In 1971 the CFA has denied the recognition of the breed. The reason was the hairless gene, CFA experts thought it to be dangerously bond with a flawed gene. One of the breed’s forefathers, the black and white Bamby from ontario, however has lived up to 18 years, which says a lot about the breed’s vitality. These cats were brought to Europe in 80-s and are quite popular in Holland and France. This breed was officially acclaimed in the late 2002, when the final version of the standard was made.

Sphinxes are the most peculiar cats among the normally sized, they are not heavy weighing from 6 to 14 lbs, yet have a thickset body with nice muscles and lacking hair. They may not be completely hairless, with some specimen having a scarce undercoat on their skin. Some parts, like nose, tail tip, paws and rear side of ears may actually have some hair. Larger ears, big lemon-shaped eyes and thick skin adorn this breed with a completely alien look, the one that has earned it a “Moon cat” name.


Head: Medium in size, triangular and somewhat edgy in shape. Elongated, the skull is defined by a flat forehead on top, and prominent jawline and protruding cheeks on the sides. Nose is short, and the transmission to forehead may be either abrupt or smooth. The muzzle is round, wide and short, whiskers are completely or partially missing.

Eyes: Large, wide open, lemon shaped. Set wide and at a slant. Eye colour should match with that of skin.

Ears: Set straight, very broad at base and large overall, tapering to a rounded tip. Auricle hair is missing, and only a very slight coating is allowed on the outer side.

Legs: Medium in length and girth, yet muscular and fit. Sphynx’ legs are arching slightly, amd have a very unique configuration where front legs are shorter than the hindlegs, granting them a signature gait.

Coat: Barely present, except for possible thin and scarce dawn, more common on the muzzle, tail and crotch area. The skin is heavily wrinkled on the head and paws, and is smooth anywhere else. Kittens are born with an extremely wrinkly skin and hairs along the spine, disappearing with age.

Sphinxes are active, sociable and playful felines. They may be called a bit mischievous, yet they are never aggressive or spiteful. They are rather friendly both to other pets and family members, constantly demanding attention from the latter. These cats are fine with living in a flat, yet are vulnerable both to cold and hot clime, as well as extreme air humidity. These cats are warmer to the touch than most others, to add more, they are hypoallergenic and thus are recommended for those having problems with other cats. These cats won’t fall in heat more than twice a year.

Sphynx cats depend on a constant skin care, for it is constantly exposed to their sweat. You would want to wipe your feline on a regular basis, while it is not recommended to bath them. There is a lot of sulphur in their ears, and you should clean it every now and then. Being exposed to a direct sunlight for extensive period of time may result in skin burn.

These cats require better rations during colder seasons to keep their body warmer than the surrounding air. 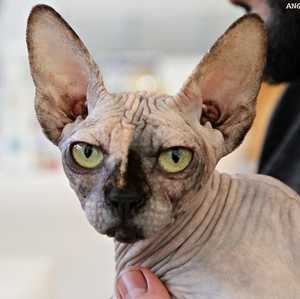 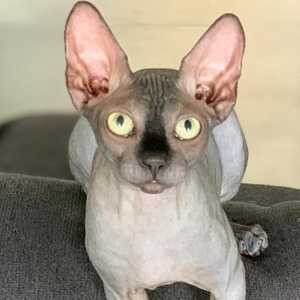 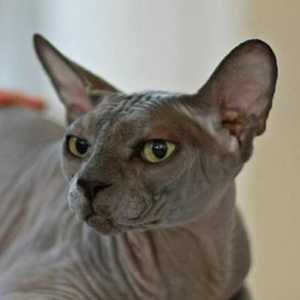