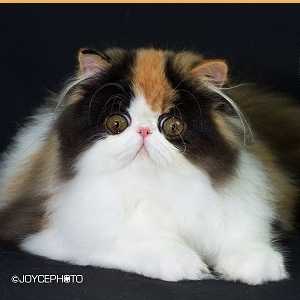 When the exotic shorthair feline has been officially acclaimed, the question arose of what to do with longhair kittens sometimes appearing in exotic litters, for there was no standard for anything like that. The CFA used to treat them as a sub-product of Exotic Shorthair and branded them as “Longhair Exotic”, leaving them with a right to be showcased at a cat show, without an ability to actually win anything. Numerous other European (except for GCCF) and USA-based organisations do treat them as Persians.

Weighing from 8 to 13 lbs, Exotic Shorthair is not remarkable in either build or size, yet while looking like a generic Persian, they have an entirely different character.

Exotic shorthair is a soft, open-minded and active feline. The persian ancestry has given them some flegmatic charm, although they are much more agile and playful, and they stay like that for longer. Being rather curious and tender, they behave like plush toys never resisting your cuddling and huggling, actually they are never agressive and thus are quite dependent on not being alone. Exotic Longhair is a great pet for those seeking for a loyal companion that is not intrusive and loud.

Exotic Longhair’s coat should be brushed with a special regularly to prevent clotting, just as nose and ears should be cleaned every so often. Longhair Exotic’s average lifespan is 15 years, although it can be more if you ward off the dental, respiratory, ocular, renal and cardiac diseases.

Breeds relative or derived from Exotic Longhair: none