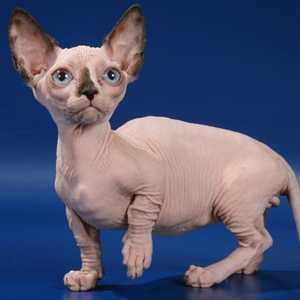 Recommended for: families with children.

This breed is often called the most peculiar in the world. It's name derives from the italian "bambino" - literally "a child, baby" from Italian. These charming felines do actually resemble infants throughout their life, both with their jolly disposition, a baby-like naive face, and their unnaturally short legs. Bambino is a result of munchkin and canadian sphinx crossing. These kittens were discovered by pure coincidence: Osbourne couple from Arkansas have bought a kitten as sweet and extraordinary as only the new breed could be - that is what they took up in their HolyMoly Cattery. It is notable that the name for the breed was invented by Pat, a born Italian. These events took place in 2005-2006, and pretty soon after Osbournes have managed to get their breed an experimental acclaim from TICA. The first Bambino litter was registered in Russia in 2005, M. Chernova's Baby Moon Cattery. As for today - there is more bambinos in Russia than anywhere else in the world. What is interesting - at the beginning of this russian conquest, the breed was known as Minskin, and only after TICA approval the official name became widespread. There is yet another alternative name for our cutest - the Dwarf Cat. It is notable that Bambino litters may sometimes yield a number of kittens with normal leg dimensions, these are also used in breeding.

A mediocre-built cat weighing around 5-9 lbs. The sexual dimorphism affects this breed to notable extent, with males being 25% larger than females. Main definitive features are, of course, absence of coat and short limbs. The body is quite athletic and strong with muscles well developed and a healthy frame. A definitive head and eye shape, coupled with a long body, add final shades to an image of badger-cat.

Head: Average in size, shaped as a somewhat narrow modified wedge with rounded contours, chiseled cheekbones and visible pinch. The skull is rounded slightly, but forehead flatness is maintained. Straight nose is defined by a noticeable stop, short muzzle is shaped with defined whisker pads and strong, not overly protruding chin, reaching forward up to nose tip.

Eyes: Large, lemon shaped, set far apart and at a slight slant. Colouration is described as bright, even, rich, and matching the coat colour.

Ears: Large to very large in size, wide and deep at base, open and directed slightly outwards. Should not be set too low or too high. Inner auricle is devoid of any hair, only a slight contouring is alloved, while outside may be covered in thin velour coat.

Neck: Medium in length, round, muscular, has a powerful and imposing look in adult males.

Body: Elongated but not stretched, muscular, evenly thick in both shoulders and hips. Broad and round chest in the front, thick and powerful shoulders above, full belly below. Bone structure varies from average to unexpectedly heavy.

Legs: Short, muscular, thicker than other breeds', hindlegs are longer than frontlegs, extremely wrinkly skin. Ideal length should be about 1/3rd of overall height, although bambinos with more orthodox leg length exist.

Paws: Oval in shape, with long flexible fingers counting 5 on front legs and 4 on hindlegs. Paw pads are very puffy, visibly lifting bambinos from the ground.

Tail: Long, proportional, quite thick at base and tapering to a rounded tip.

Coat (skin): While bambini appear hairless, a small amount of short, delicate hair persists on legs, tail, outer ears and inner hips, as well as nose bridge. Base body may either lack hair completely ("rubber" or "hot wax" texture), or be only covered in short hair, less than 2mm in length, giving it a velvety touch. The skin feels nice and delicate to the touch, but is sufficiently thick and has a sufficient underlying fat layer aiding with elasticity. Wrinkles are present everywhere on the skin, especially around the muzzle, neck, shoulders, between ears and on front legs.

Colours: Any, excluding agouti and other segmented colouration.

Disqualification on shows: Weak back body. Tail breaks, kinks and other defects.

Bambino cats are favoured for their mild temper, curiosity, wits and social skills, they are also quite addicted to every member of the family. They are remarkably agile for, and even despite of their limb length, sometimes they are even compared to chipmunks because of that. They move really fast in their badger-like pace, and are capable of vertical jumps, although they are not extremely high. Their remarkable playing ire makes bambino a great companion for children, other pets and even birds. A cat like this would nicely accompany you on your frequent relocations and travels in any transport, still your presence and contact would be necessary to prevent stress buildup. Last but not least feature is their ability to remain in a rabbit-like pose, looking like an infant kangaroo.

These cats seem to be blessed with good health, which minimises all chores necessary to a breeze. Their hair, or what they have for it, may cause some trouble e.g. when they get sunburn really fast, or when they get an actual burn leaning to an air heater. Preventive medicine is the finest anyway, so you could just keep an eye on them to make things easier. It would also be natural to give them a warm blanket, wrap or an overall when the weather gets cold.

These little cats are the beasts of metabolism and appetite, you might want should come up with a high calorie intake diet.

Breeds relative to or derived from Bambino: None confirmed.