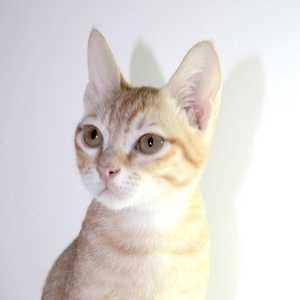 A native feline from near east, UAE, Bahrain, Qatar, Kuwait, Saudi Arabia and other countries from persian gulf. These cats have developed there all by themselves more than 1000 years ago without any human intervention. They had to live semi-wildly in deserts and populated areas alike, orbiting around settlements yet staying independent. Due to desert expansion, however, Mau populations had to draw closer to humans, finding shelter around the streets, back alleys, or given luck - even in someone's house.

This is where their name “alleycat” comes from. People were more into bringing cats from abroad or buying ones from acclaimed and popular breeds, effectively disregarding local species. It was for Petra Muller, a UAE residing felinologist, who has developed selection programme and took up their breeding earnestly. Only then would felinological society look at this breed. Soon after, in 2008 particularly, the breed was given a conditional admittance, with ability to take part in world-class shows following in 2009. Nowadays the breed is not really popular outside it's domestic locale.

Head: The head appears to be round, but it is slightly longer than broad with well defined whisker pads. The profile is slightly curved with a prominent chin.Eyes: Oval, expressive. The eye colour corresponds with the coat colour.

Eyes: Oval, expressive, color should correspond to the body color.

Ears: The ears are large, broad at the base, erect and set slightly to the sides of the rounded head, with good distance between the ears.

Legs: High and long, rather thin, but strong.

Tail: Of medium length, rather flexible, tapering to the ears.

Coat: The coat is without undercoat and close lying to the body. The texture in adult cats should not be too silky, it can be silky only in young cats. The coat looks soft, but it should be hard to touch.

Color: White (pure, without yellowish tone), black (without rusty hue), chocolate, red (tabby: mackerel, spotted). Any amount of white. The typical pattern of the cats living on the asian continent.

Penalize: Too much undercoat, silky texture in adult cats

Disqualification on shows: Too heavy and cobby body and legs, tail deffects.

Mau cats eager for freedom yet are friendly, level and comfort. They are not conflicting and are always pleasant with their owner and any other pet. Never being too loud, these cats are not intrusive at all.
Forged in the extreme heat of desert, arabian feline is surprisingly tough.

They are generally easy to maintain. Being very neat by themselves they won't require often washes, although their ears and teeth are something to keep an eye on. A scratching post and flea control would be necessary, too. Taking a nap at some ceiling-high place is what makes them overjoyed, you may want to consider that before buying a Mau.
Being a natural breed, they are not prone to genetic abnormalities, also the extremes of their past made it fundamental to them to have a nice walk in the open every so often for their acute hunting and survival skills to stay sharp. Turning aside from their ancestors path will make their immune systems suffer.

Mau are the ones who love to eat nice and big, this could possibly lead to obesity and overeating, but their love to physical activity counters that well. Not being that gourmet type, they are fine with almost anything, although you should look that their rations are balanced - quality cat food does that really well. Natural, homemade foods are also welcome, with seafood being a most optimal choice.

Allowed crossings: It is healthy to cross these with native cats from their original locale so that they don't lose their natural charm as a result of breeding.

Breeds, derived or developed using Mau: Not known at the moment.