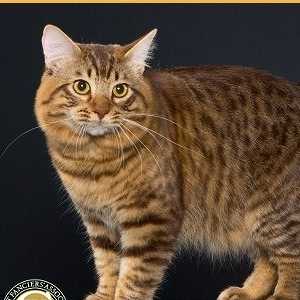 In 1990-s American fanciers have developed their own Bobtail breed based on local shorthair home pets (mostly ones from New England). It is not known to us who is the genetic ancestor of American Bobtail, whether it is Manx, Lynx or Japanese Bobtail: there are shorttail and even tailless kittens in american bobtail's litters. The forefather of the breed is thought to be Yodie, the tabby kitten who was picked up in 1965 close to native american reservation in Arizona. Yodie had a peculiar wild temper and an a tail that was more peculiar than how short it was.

When the boy has grown up, his owners Mr and Mrs Sanders found him a matching spouse - Siamese kitty Mishi. The shorttail kitten was then crossed with a creamy cat, and the offspring was short tailed yet again. Only then it would be clear, that the short tail is a result of a dominant gene mutation, which is how breeds are made! That was just the thing Mindy Schulz and Charlotte Bentley did. This is how American Bobtail, only shorthair at first, came to life. There were successful attempts to derive a longhair strain in 80-s, they crossed American Bobtail Shorthair with Himalayan cats (persian colourpoint). The breed was given it's first standard in 1970, and was acclaimed by TICA, the first worldwide organization to do so, in 1989. Novadays, the breed is mostly favored in USA and Canada.

A medium-sized feline, with adult's weight ranging from 6,5 to 20 lbs. American Bobtail may be either short and thick, or may have average height and powerful, prominent muscles. Their defining feature is their short tail, reaching their heels.

Eyes: Large, broad almond in shape, slightly slanted, bias to the ear, dense brows. Well developed eye-brows give a severe expression to this breed. Eye color has no relationship to coat color, except in pointed, minks, and sepias.

Ears: Medium to moderately large, wide at the base, with slightly rounded tips, erect. Set high, following the shape of the wedge. Lynx tipping, furnishings and oceli markings are desirable. Ears may appear pointed when lynx tipping is present.

Torso: Rectangular, moderately long and substantial. Back rising towards hips, firm boning, broad chest, hips are almost as wide as chest, rather massive. Muscular and athletic in appearance.

Tail: Short, with a minimum length of 2,5 of actual bone. No longer than 10cm (may extent to the hock). Slightly crooked.

Coat: Medium-long, dense, with double structure, rather rough, with dense and resilient guard-coat and moderate undercoat. Coat does not lay close to the body and looks rather shaggy, due to this the cat looks bigger than it is. Longer on the ruff and tail.

Color: Any color, including blue and red tabby. Ghost markings desirable in lynx points. Tarnishing on silvers not penalized.

Disqualification on shows: No tail, full length tail. Tail with less than 1 inch of bone or fused and not flexible at base.

What they lack in their tail length, they have in their mobility and agility, their jumping and climbing skills are definitely to reckon with. Their temper is very soft, mild, and their affection to the owner is quite strong. Being kind enough even to other cats, they may sometimes take up someone's litter upbringing, and would not even mind dogs in the house. Featuring great educative capabilities and great intellect, they savor open-air walking, hunting and always having company. Their physical development is not as fast, however. They would usually gain full adultery by age of 3.

These cats demand substantively more effort to maintain, compared to their shorthair counterpart, especially if your pet frequents the outdoors. During the molt you might want to use a special brush on a regular basis.

Their health is also a something to cater to, bearing a mutation they are vulnerable to inherited diseases.

Si-bob (a crossing of siamese and american or japanese bobtail)