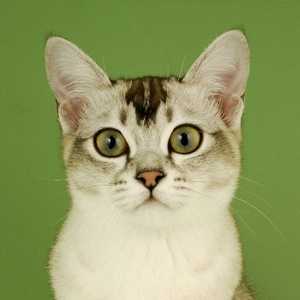 Being developed in 80-s, the breed is relatively young. The First Asian litter came to life in 1981, as a result of accidental crossing between chinchilla Persian and lilac Burmese. As a result, they've got burmese-like shaded black shorthair kittens. Both vivid paint and peculiar character have inspired owners to go on with Asian cats selection, as a result we have a whole group of breeds, united under “Asian feline” name. Here is a list of them:

Asian shorthair was given admission by GCCF in 90-s. These cats draw new breeders with their vast variety of colours, splendid appearance and an easy temper. Scarcely met here in Russia, they are very popular all over the world.

Eyes: Set wide, very big and expressive, from can be from broad almond or rounded. Eye color can be only yellow or amber, pure without any speckles.

Ears: Wide at the base, medium size, set high, separated rather far from each other, a little bit tilted forward.

Body: Medium size and length. Visually more light that it is.

Legs: Proportionate to the body, rather long and thin, but very muscular.

Paws: Nor big and compact.

Tail: Straight, long, without any defects, tapering to the end.

Coat: Very short, thin and shining, laying close to the body, has almost no undercoat. Inner part of the body is usually lighter in any colors.

Disqualification on shows: Any amount of white in the color, green eyes.

A peaceful, tender and obedient pet. Lives well in a flat, doesn't suffer from lacking open air. Their behavior blends strong affection to the owner and sympathy to every family member, including children. While being very smart, curious and receptive, they are also very playful, active and visually emotional. Their character is really easygoing, although they can and will protect their litter and themselves. Despite being not very tolerant to desolation, they won't mind your short absence.

If we were to describe it in one word, it would be “easy”: all you are going to need is a rubber brush-glove. You will not want to brush them more than once a week, or wash them more than once a month. However, it is recommended to check and clean their ears of dirt, sulphur and leeches. Their eyes should also be cleaned of secrets on a daily basis, moist cotton swab or napkin ease this by great extent. A scratching pad is also necessary for them.

Breeds derived or relative to Asian