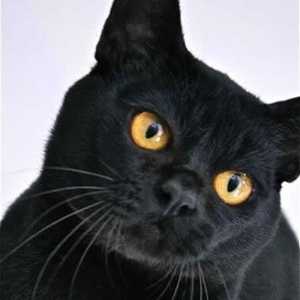 By giving half a glimpse at this magnificent cat you may guess what has inspired Rudyard Kipling to make Bagira a gentle and helpful character. The pitch-black coat of these felines makes them look exactly like a pet panther! Even it's name honors it's ancestors - indian panthers. It should be interesting to note that black cats are believed to be avatars of joy and bringers of happiness, much unlike european tradition.

Unlike the American Bombay, a 57 years old cross between Burmese and American shorthair, this is a relatively new breed produced by breeding Burmese and British shorthair in 1997. This is the distinguishing difference between the two breeds. The development programme for the breed is a work of Heather Brown, who has presented it to CCA, backing it by her idea of producing a healthy strain without the inherited faws found in some Bombay straits.

The shining black coat and ember yellow eyes - they are likely to form your first impression of the breed. Australian bombay are mediocre in size (6.5 - 11 lbs), yet are rather compact and graceful. They weigh more than they could because of their well built frame. The british ancestry gives an additional hint of roundness to their head and eyes, as well as wider set and rounder ears.

Head: Rounded, without flat planes or angles. Sculls are full. Muzzle is broad, short and rounded, it harmonizes with contour of the head. Nose is short and wide with a visible break at the profile line,

Ears: Of medium size, wide at the base, set wide, tilted forward, as is listening, tips are rounded. Hairs are possible inside the ear and at its base

Body: Of medium size, strong; neither cobby, nor prolonged. Shoulders are robust, chest is wide and well developed. Boning is massive, musculature is strong. Back is straight form shoulders to hips.

Legs: Of medium size, proportionate to the body, strong. Boning is strong with well developed musculature.

Tail: Of medium size, rather wide, straight, slightly tapering to the rounded tip. Proportionate to the body.

Coat: Short, glossy, lying so close to the body, that is seems to be laqured skin. Coat is a unique feature of this breed. It resebles silk. Undercoat is almost absent.

Penalize: Any deviations from the standard. Flat forehead, rounded eyes, too weak boning and thin tail; oriental type of the body; too hevy body tyoe; too dense or not closelying coat; white spots or separate white hairs; too strong «stop», too rounded eyes.

Disqualification for all breeds: Amputated claws, criptorhism, deafness. Any bone deformations on body, head or limbs.

Bombay cats are among the easiest to look after. Their short satin coat and the lack of undercoat eliminate the trouble of undercoat spreading all around, even during the molt season. There is also no reason to wash and brush a bombay without need, as if they are they are more than able to keep themselves in normal condition. If you absolutely have to wash your darling - use a dedicated black coat shampoo and conditioner. After bath it is enough to just soak them with a towel and leave them in a warm place. Although they love to be brushed and their coat feels really nice to the touch, excessive tension may be harmful to them. It is enough to pet them with your hands or a piece of cloth on a weekly basis.

Bombay cats have a hearty appetite, especially the kittens. While most bombays may eat well and have no fat problems, some should be given a low-calorie nutrition plan.
Note that beer yeast increases coat shininess.

Breeds relative to or derived from Bombay:
none