Thai breed, occasionally called the Old or Traditional Siamese, has little in common with your everyday siamese, only having similar coat and eye colours. Despite that, first Thai cats have indeed originated in Britain from first wave Siamese brought in early 1870-s from Thailand. Originally these two breeds were being developed as one, and it was not until 1990-s when the separate standards were finally devised. Despite that, however, only few breeders have picked up Thai development up until recently, with little connection or support from major felinology systems. As such, despite being traced to native felines and being as ancient as they get, contemporary Thai cats are still a novel concept.

For curious among us, Thais were mentioned and described in Ayutan manuscripts dated XIV-XV century. What is more peculiar is the fact these cats were documented in Russian South by Peter Simon Pallas in late 18th century. The obviously asian felines he encounters are described as "Medium in size, has longer legs than what is common, longer and narrower head and a tail is three heads long. Coat looks like that of a minx, but is more vivid around muzzle and tail, less so on the belly and the sides. Chest is adorned with a white medallion, nose is covered with a dark mask, that extends upwards up to the forehead, where forms the likeness of a triangle. Ears, paws and tail are very dark in colour, while the undercoat is rather light and soft. Tail is covered with short and silky hair, and overall coat is more pleasant than that of a normal cat, is smooth and reminds of minx.". It is anybody's guess as to how these cats ended up in Insar village vicinity, but they may very well be among the ancestors of modern Thais.

Of course, there are multiple theories aiming to explain the Russian adventures of cats from Thailand, and the most legitimate claims that a whopping 200 cats were given by Rama V to Czar Nikolai II, side gift to go along with payment for a company of soldiers sent to protect his royal residence. The more modern theory explains that only two cats were brought from Europe by a renowned puppeteer Sergei Obraztsov in mid XX-th century. 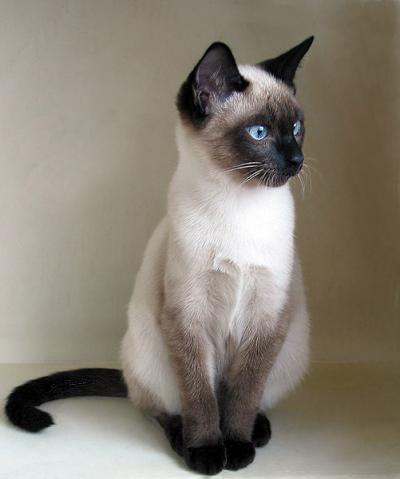 Head: Medium in size, round, devoid of flat and angular contours. Forehead is not too protruding, cheekbones are round, cheeks are prominent. Forehead-nose transition is developed and is at eye height, no "stop" is allowed. Nose is straight and somewhat short, muzzle is defined by smooth contours. Thai tend to have stronger chins, males pair theirs with chiseled cheeks.

Ears: Average in size, set wide and at an outward slant. Broad at base, tapering to a rounded tip.

Neck: Medium to long, males with shorter necks are sought after.

Body: Medium in length, fit with developed muscles and a strong bone structure. Chest is quite broad.

Paws: Medium in size, round and neat.

Tail: Adequately long, rather thick throughout and more so at base, tapering to a pointy tip.

Coat: Thin, well clinging, yet elevated from the body by scarce undercoat.

Colours: Any acromelanic patterns are allowed, except for white, tortie, tabby and tabby-points. 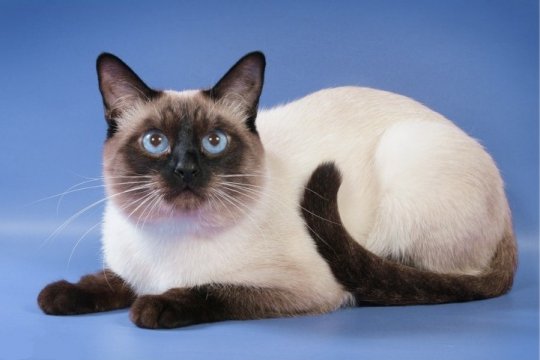 Thai cats are extremely smart for felines, and are also curious, brave and schoolable.
Very active, tender, social and mobile, able to reproduce a multitude of sounds as well as the old "meow". Unexpectedly loyal to the owner, these cats form the bond with the owner and not the house, yet are capable of showing character and envy. Remarkable intelligence is backed by and supported by their lengthy lifespan: 10-14 years on average, while cats to live more than 20 and up to 28 years are not unheard of.

Thai coat is quite resilient and requires no special maintenance, all it takes is occasional wiping with rubber brush, special mitten or plain wet hand. Due to their unrelenting playfulness it would be wise to block the windows and balconies with a strong grid or mesh.

Opting for natural diet, keep in mind that liver and seafoods may cause coat to darken with time.

Breeds relative to or derived from Thai: none.