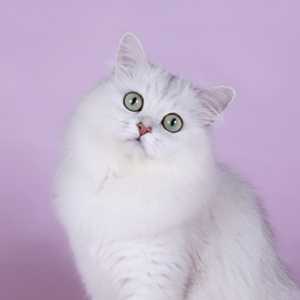 This breed hails from 90-s. Breeders have crossed Burmese and Persian Chinchilla to produce this wonderful breed. It's name was made in 1999 the same way the breed has been. However, it was not always like that, at least 's fanciers wanted their longer haired kittens to be called Australian Tiffany. Novadays, Burmilla Longhair is a more than popular breed all over the Green Continent, but is seldom met anywhere else. English have found their first burmilla fanciers club in 1984, the year after it was admitted by BCA and became eligible for cat shows. The official admittance from CSFF has followed in 1989, with FA NSW registering it as Australian Tiffany in 1999. However, this name was not adopted by other international organisations, and does not admit this breed at all. WCF admits this longhair version of Burmilla only as a member of WCC.

Burmillas inherited body type from their Burmese ancestors and shaded coat color from their Persian ancestors. These cats are of medium size, but they are surprisingly heavy for their size – 4-7kg. The cat of a sturdy oriental type, but is rather elegant. They have a well developed musculature and a rather solid boning.

Head: Of a medium size, rounded, rather broad at a brow line, with a gently rounded top of the head. Then narrowing towards the blunt muzzle. A muzzle is short and wedge-shaped, well developed, broad, with rounded contours. A definite nose stop at eye level with no appearance of a break; straight nose bridge; level bite. A nose leather is red (not pink), circled with a dark line. There is an “M” sign between the eyes – as a reminder of a tabby markings. A chin is well pronounced. Hairs are rather sparse above the eye level.

Eyes: Big, set wide, a bit slanted. Have a form of a crescent, circled with a dark line. All shades of green are accepted but bright-green is preferable. Kittens and young cats (up tp 2 years) might sometimes have a yellowish shade in the color.

Ears: Medium to large, broad at base with slightly rounded tips. Set with a slight forward tilt in profile. Covered with a short hairs from the outside and have longer hairs inside. Viewed from the front, the outer line of the ear continues that of the face. This may not be so in mature males which develop a fuller cheek.

Torso: Of a medium size, rather compact. Broad, rounded chest, shoulders and hips are of one width. Hind legs slightly longer than forelegs. Boning is very firm, musculature is well developed.

Tail: Of a medium length or long, tapering to a rounded tip.

Coat: Thin, silky, of a medium length. Getting longer to the lower body and the tail. It is rather more dense on the tail, making an impression of a plume. Looks weightless.

Colors: All silver shades are accepted. Agouti-effect is only acceptable on the head, legs and tail. Inside of the body should have no stripes. Type of the color is shaded or shell chinchilla – black, chocolate, red, blue, lilac, cream, caramel and other. Ground color is silver, the tip of the hair is black, blue, chocolate or any other color. Tipping is well devepoped. Back, “mask” on the face and tail are darker.

Penalize: weak chin, wrong form of the eyes (almond shape is not accepted); bump on the nose; too long legs; too long or shaggi coat; tabby markings in tipping; solid colored hairs; uneven tipping; tarnishing in coat. Any color on hocks on chinchillas.

Longhair Burmilla is an easygoing feline. It is not aggressive nor is conflicting with other pets, still they may be jealous of them when gets less owner's attention. Kittens are oh so active and playful, but they become more and more meditative with years. These cats savor open-air time, and are better at a house with a yard than in a flat. It is thought that these cats have an ear for music and rhythm.

These cats are actually a joy to have. Despite their long and thick coat you don't have to groom them every day, 2-3 times a week is more than enough. During the molt, however, you should comb them twice a day to free them of their falling hair, after procedures you may use a suede piece to straighten the coat. Their eyes, ears and teeth do also require monitoring. These cats don't call for frequent washing, one could wash them the need arises or on a seasonally basis.

Balanced, poor on carbs and fat rations are recommended, as if burmillas are prone to overeating.

Breeds derived from or relevant to burmese longhair: