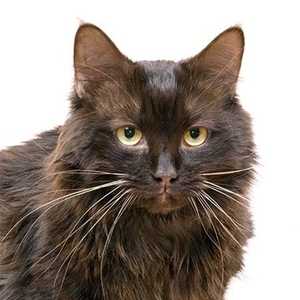 This “york” part in the breed's name gives us some info on it's origin already. Yes, it is an american breed, developed in 1983 New York by Janet Chiefari. It is notable that Jane was no fancier, but just a person who loved cats. Well, one day she had a colour of a distinct rich brown color for which she was named Brownie. As you may guess, some time there were more chocolate-brown kittens, a particular one - Minky, has inspired her Janet to take up a breed development, first step in which included a cross between Minky and Brownie, the resulting Teddy Bear and Cocoa became the first of York. The deeper roots of the breed are not to be known, as if Brownie was a stray cat, and has probably had some siamese and persian parents along the road. The breed had its first public appearance in 1989, where a 6 months old chocolate kitten was just so good he was awarded his first titles on that day. In 1990 the breed was given an official acclaim from CFF and AGFA as an experimental breed. Some time later the WCF would also give its recognition to York breed, although they still are scarcely met anywhere but on the american continent.

A well-balanced, slim and energetic feline with elongated yet fit body. Their body build resembles the one of siamese cats, yet is noticeably bigger and badder, their muscles are developed well enough to make an adult York weigh 15-18 lbs.

Head: Medium sized, but appears small in proportion to the body. The shape is a modified wedge, which starts at the nose and continues to the tips of the ears. The forehead is slightly rounded. Long, straight nose, which is evenly medium broad, with a slight indentation at the level of the eyes. The muzzle is well defined, elongated and with a smooth contour, but it appears somewhat square because of its pronounced whisker pads. The chin is firm with a gentle contour and forms a straight line with the nose and the upper lip.

Eyes: Of medium size, oval shaped and set at a slant towards the nose; in harmony with the wedge-shaped lines of the head. The distance between the eyes is at least one eye width. The colour ranges from golden to hazelnut and to green, the purer and deeper the colour, the better.

Ears: Large, moderately pointed, broad at the base, slightly flared and tilted forward. Inner side is well furnished with tufts. Set wide apart, with at least one ear's width between. Continue the wedge-shape of the head.

Neck: From medium to long.

Body: Medium to large size, long with substantial bone structure and firm muscles. The rib cage and the shoulders are not broader than the hips.

Legs: The legs are long, slender and rather muscular. The hind legs are higher than the front legs.

Paws: Small, oval, with tufts between the toes

Tail: Мedium to long, broad at the base and slightly tapering to a rounded tip. The tail is fully furnished with flowing hairs.

Coat: The coat is of medium length, fine and glossy, falling down the body smoothly. The texture is soft and silky with well developed undercoat, which shall not be woolly. The coat is shorter on the shoulders and becomes gradually longer towards the back. A little frill is desirable.

Colors: Color is a peculiar feature of the breed. Standard recognizes only 4 colors:

The coat is evenly coloured on the entire body, even and solid to the roots, without any shading,

without rusty traces, without white brindling or tabby markings in adults.
Bi-color cats have white color over the ruff, chest, belly, feet and sometimes - the muzzle. Usually, kittens have lighter color than adults, and, may sometimes, have “ghost” markings over the body. Color should stabilize to the age of 18th months.

Penalize: White medallion or a white patch on the belly in cats with solid colour

York is a pretty self-reliant cat, that need no excessive attention from its owner. They behave peacefully, friendly and tenderly with any member of the family, paying its direct owner a special honor of sleeping on his/her knees. These felines are oftenly called satellite-cats, as if they would accompany you everywhere. Being an active, sociable and a playful cat, york will never stay away from the fun. They get on with family, kids and even strangers quite fast, never showing aggression yet always being somewhat deserted from the latter. To top up the abovementioned, note their cool behavior in watery situations and exceptional mouser skills.

Yorks are rugged enough to need little to no maintenance measures. All you need is giving them a nice wash and brush every so often. Yorks used to live in the farms and thus are pretty healthy on their own, although sometimes they may be vulnerable to indigestions other minor bowel abnormalities, sometimes resulting in excessive molt.

Breeds relative or derived from Yorks

Unofficial and slang names for the breed