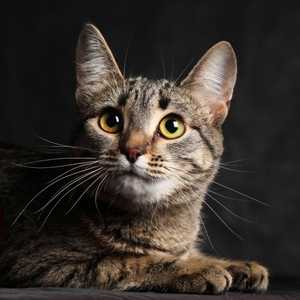 History of the Breed

This breed, as you may guess, hails from the state of California. It's creator Paul Casey wanted to develop a breed that looks feral and wild, but actually is neither. “Look of a leopard and a character of a lamb”, that is how he used to put it. The inspiration for that project was taken from his Tanzania journey, where he has witnessed the cruelty of leopard hunters.

A home pet with a savage charm and tender personality should, according to Casey, be a living proof of impermissibility of rare species slaughter. In other words, people are supposed not to wear fur coats looking like they are made of pets. However, at the beginning of their project, breeders have tried to avoid crossing with wild animals, and starting with 1971 they were using Abyssinian, siamese, british and american shorthair, maine, persian, african and asian stray cats. It took 10 years and 11 generations to produce cats visually resembling the royal leopard. Some sources claim that the spots on their coat look like bird's feathers and call the breed Californian Glittering. The first Californian Spangled were registered in 1987, later in 1993 TICA has approved their standard. As with many American breeds, it is seldom met in Europe.

A fit and agile cat scaling from medium to large and weighing from 9 to 18 lbs. It's musculature is well developed on it's body and long legs. Despite the asian ancestry, they don't look like typical asian cats. The angle at albows is 90 degrees, this makes their forward legs look drawn backwards. A crouching, prowling carriage gives an impression of low-sitting body. All in all, these cats look quite fierce. Their most specific breed-defining feature is their paint, which looks like the one of south-american felines like ocelot, margay and jaguar.

Eyes: Big, almond form, set wide and oblique, often with dark contours. The color of yeys should harmonize with the coat color: from goldish-brown, to deep blue – in pointed patterns.

Legs: Long, strong. Ancle angle is 90grades, which makes an impression that front legs are moved back and body is set low.

Tail: Rather long, evenly wide from base to tip. Banded through all the length. Tip is dark.

Coat: Short, except for the belly and tail, where it is a bit longer, silky to touch, dense, of oduble quality, not close lying.

Colors: Spotted tabby and «show lynx» (pointed tabby). Pointed tabby covers back and sides of the body. Stripes are going from the ridge of the skull to shoulders, Spots on back and sides can be rounded, triangle and quadrat. They should be definitely separated from each other. Sports cover head, chest, legs and tail as well. There are 8 classic colours: black, brown, blue, bronze, charcoal, red, golden and silver. “Snow lynx” has blue eyes together with black spots.

Disqualification on shows: Spots in the form of half-moon or fish-bone.

Disqualification for all breeds: Amputated claws, criptorhism, deafness. Any bone deformations on body, head or limbs.

As with many modern breeds, this cat's feral appearance has nothing to do with it's gentle, level temper. Californian spangled is a kind, sociable and energetic feline. They are known for their mobility and hunting instincts, but never for cruelty or aggression. A body like theirs needs plentiful exercise to stay at it's best, as such they are better held in a house with a yard. Tender and sensitive, this cat accepts and is accepted by other pets, as well as it handles the loneliness.

Being a shorthair breed, these cats don't need much attention. You may simply pet their shiny coat every so often.

Alternative and obsolete names for the breed

Unofficial and slang names for the breed